You are here: Home - Laws and regulations - Impact of India’s GST on Chinese companies 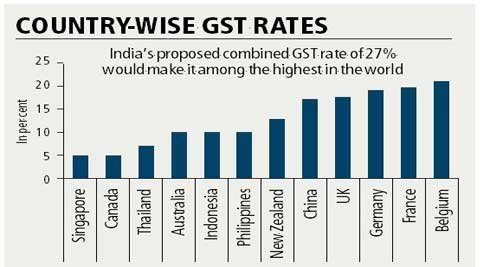 In a landmark amendment to the Indian tax regime, India’s upper house or the Rajya Sabha passed the Goods and Services Tax bill which streamlines and simplifies taxes for the entire country.

In effect, the GST brings India, a US$2 trillion (£1.5tn) economy with 1.3 billion consumers, into a truly single market. “No country of comparable size and complexity has attempted a tax reform of this scale,” Harishankar Subramanian, of Ernst and Young told the BBC. The GST bill which had been pending in parliament for a few years, finally got passed allowing companies to regulate their taxes between India’s 29 states better.

The new bill will upgrade India’s tax system on par with 21st Century companies needs, enabling Asia’s third largest economy a strong tax regime going forward. It will therefore ensure businesses can expand nationwide. Freight trucks will now be able to move quickly across India, rather than spending hours idling at multiple checkpoints filling in forms and making tax payments when they travel between states.

Additionally, the overall tax rate is expected to come down, from its current rates. News reports peg the GST rate at between 15 percent and 18 percent. “If you add all the taxes together, today this is almost 27-32 percent… With GST coming in say at 18-19 percent zone… that is still a difference of 8 percent to 10 percent. Large part of that will eventually get passed on to the customer,” Ashish Goel, co-founder and CEO of online furniture retailer Urban Ladder, told NDTV Profit.

How will the GST work? The Central and state governments will jointly administer India’s dual GST. This means it will be a set of 38 different taxes – a GST for each of the 29 states and seven centrally administered union territories, a central GST and an integrated GST on inter-state supplies of goods and services. While all this seems complex, the system is a lot simpler than what exists today. If the GST is implemented as planned in a country the scale of India, it will be considered a minor miracle.

Similar forms of the GST already exist in 160 countries globally. Nevertheless, the crux of the GST is that the tax burden of taxation moves from the state of manufacture to the state of consumption of goods and services in the state, which means there will be no need to pay additional taxes like excise on manufacturing, VAT on sales, and entry tax for a particular area.

As a result, large populous states with large numbers of consumers like Bihar and Bengal are expected to benefit from the new tax regime. In order to make sure the tax is truly 21st century, Indian software giant Infosys is building a gigantic electronic infrastructure – a GST portal – where taxpayers can register, make payments and file returns. Some 7.5 million businesses will be covered by the tax. When will it be implemented? The measure approved on Aug. 3 is only the first step in making the new tax system a reality. It paved the way for constitutional changes, which will be followed by lengthy, and potentially fractious, discussions over the precise rates of tax.

A balance needs to be struck between setting a high enough rate that earns the revenues sought by the states, but one that isn’t so high that it sparks inflation. This in a democracy like India will take a while, with no definite timeframe.

Meanwhile, tax collectors, the IT infrastructure and businesses will need to understand the new tax structure fully before it is rolled out. Pitfalls? The new regime is expected to come with its own range of complexities, paperwork and arduous administration. Ultimately, its implementation is what will need to be assessed to judge how beneficial the change in India’s tax laws are to the consumers.