You are here: Home - Foreign Policy - A handshake across the Himalayas

A handshake across the Himalayas

A handshake across the Himalayas 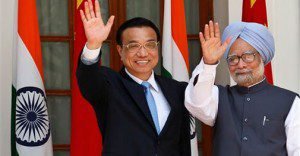 One third of the worlds populations, almost a half of global trade, sweet and sour neighbours, Chinese Premier Li Keqiang’s three day visit to India was a statement to the world. High on symbolism – India being his first foreign country to visit after becoming Premier, signing eight Memorandums of Understanding and carrying a charismatic air of brotherhood, Premier Li, wooed India at a time when border tensions between the two had once again been raised.

Quelling apprehensions, he spoke of friendship, of a centuries old bond between our countries, of collaborations and potential trade  tie-ups. In New Delhi, the Premier and his 100 member entourage met with his Indian counterpart Dr. Manmohan Singh. They also met ministers within the External Affairs and Trade and Commerce Ministries. Additionally, Premier Li met captains of industry, corporate czars and Chinese businessmen in India. Having spent two days in the capital, he also visited India’s financial capital Mumbai, where he met Dr. Kotnis’s sister and held an engaging discourse with businessmen and the media.

Charmed by the Tata group which is setting up five hotels in China under the Taj brand, Premier Li, spoke to elevating India-China ties to boost collaboration between our people. Enthused to eliminate the ballooning trade deficit in India’s favour – now over US$29 billion, Premier Li, suggested opening our markets to each other, leading to greater investments and M&A collaborations. By jointly creating wealth and symbiotically supporting each other, both nations agreed that we could look towards a brighter Asian Century.

Pin pointing hard sectors such as power, telecom and infrastructure where China can clearly aid India, the two nations also came to the conclusion that softer skills were also scalable. While MOU’s were signed for water treaties, agriculture, processed and marine foods, as well as urban development in sewage and water treatment, the neighbours also agreed that collaborations in the tourism sector, cinema and ancient arts such as Yoga and Tai Chi could also be developed.

Having made the first move for his handshake over the Himalayas’ Premier Li has made a clear sign that the new Chinese government is looking for friendlier ties across the border. Its now upto India to reciprocate and and make her ancient slogan of  atithi devo bhava come true.