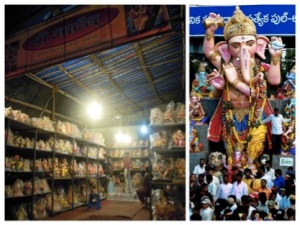 One evening after work, I was invited to Café Zoe, a popular restaurant in the Lower Parel area of Mumbai by a local friend of mine. It was during rush hour, so I got off the cab early and decided to walk the last 5 minutes to the restaurant. This was the first time I ever walked in Mumbai’s  city center, and needless to say, I was fascinated by the happenings on the streets. They were so distractive that I took some 15 minutes to get there and was late for dinner. But it was well worth it.

A good traveler, in my view, should not only be looking at scenic spots and tasting good food. But rather, he/she should somehow break from the role of a travel and look at a city as if he/she is part of it, from the standpoint a regular citizen. Daily scenes on the streets tell you so much about a place. Especially in downtown Mumbai where people from all walks to life gather, one is able to see a variety of lives from all classes of society.

As I started walking, the first thing that caught my attention was a couple huge trucks parked on the side. Their back containers were wide open and facing the streets. Filled with statues of Ganesh, the Hindu elephant God, these trucks served as shops and display windows. Mid-September is Ganesh Chaturthi, a holiday that celebrates the birthday of this God. Marking the end of this festival is the immersion of the Ganesh statues into a river or a sea. As the festival is around the corner, shops displaying the God are springing up everywhere.

As I kept walking, I saw a wide three-storey building. From the outside it just looked like a giant doll house. There was a corridor facing the street that connected every apartment on the same floor. Interestingly enough, many apartments had lights on, and doors and windows open. It seemed like families did not mind being seen from the streets. I could clearly see each household’s private life: one big family was gathered in front of the TV, from grandparents to toddlers; a housewife of another family was washing dishes diligently in the kitchen; and some other families were not home but left their lights on, and one could see the slightly rusty fans spinning in the empty living room.

Not only was it transparent inside the apartments, but one could also see people walking on the corridor outside. There was one girl leaning on the balcony and combing her hair while looking at the street. This was such a classic scene that it even recurs in TV advertisements and movies. I wondered as I walked past, whether some boys were also hiding in the street corner and looked up at her with affection.

I took a glimpse at my watch, and knew I couldn’t afford stopping any more. As I walked again, I passed by a few tiny temples. Exotic as they seemed, I did not want to be distracted. Then I happened to pass another temple as its bell just started striking. A passer-by in front of me suddenly stopped, turned around, folded his hands and prayed to the temple quietly from afar. It was such a touching scene that I had to stop to take a photo of it.

In fact, not only were there temples, but there were also some holes in the street walls at every other block. The hole was carved to leave space for a Ganesh statue, which always had fresh beautiful flowers around his neck. On the chaotic streets of Mumbai, surprisingly there was always space left for such peaceful piety. One could be rushing through traffic and blowing honks hectically, but the moment they saw these little corners, they were restored to a peaceful state of mind. Looking at the temples and statues almost had a therapeutic effect on me, as I saw them as my safe havens away from the anxiety of the world.