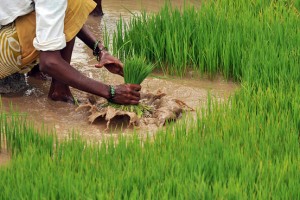 In Asian agrarian economies such as China and India, the growth of agriculture, the monsoons and agricultural technology and supply chain mechanisms play a very significant role and direct role in the growth of the economy and GDP numbers. For example, the Indian government believes 4 percent growth in agricultural gross domestic product is necessary not only to achieve the nation’s overall target of 9 percent growth but also to reduce poverty. Like in Thailand, both India and China also believe that a rise in agrarian salaries will lead to better productivity, social security, employability and raise the economic standards of the nation in general as about 70 percent of India’s population is rural and slightly over 50 percent of the workforce is engaged in agriculture.

India has the second largest amount of arable land of any country after the U.S. Although the total land area of the country is only slightly more than one third of China’s, India’s arable land is marginally bigger than China’s. Yet India is the second largest producer of rice and wheat after China, with China producing about 40 percent more rice and wheat than India. India is also the second largest producer of fruits and vegetables in the world after China, but China’s fruit production is three times India’s production. India is first, however, in the production of mangoes and bananas. When it comes to spices, India is number one in production, consumption and exports.

What is the reason behind India’s low agricultural productivity?

Notwithstanding India’s appalling public distribution system, where grains that can feed millions are left to rot in granaries that are not equipped for proper storage, an interesting article in the Wall Street Journal by Lakshman Krishnamurthi a professor of marketing at the Kellogg School at Northwestern University; and Sugandha Khandelwal a former research associate at the Kellogg School seek to shed light on the dismal state of Indian agriculture in comparison with that in China. Below are excerpts –

Although the overall numbers are impressive, the productivity of Indian agriculture is low. On average, acreage devoted to paddy cultivation declined by 6 million hectares between 1970-1979 and 2000-2009 in China while it increased by 4.6 million hectares over the same period in India. In fact, India has had more land under paddy cultivation than China every year since 1960. Yet, China out-produces India by a wide margin.  Even in Punjab, the most productive state in India, rice and wheat yields only match the recent average for all of China. Although the production disparity has decreased over time, paddy yield continues to be significantly higher in China than in India.

In the case of wheat, China had more acreage harvested than India between 1960 and 2000. Over the last 10 years, however, the situation has reversed. An important reason for the decline in grain acreage in China is lower domestic demand for grains as China has become wealthier as well as a shift to higher value-added crops such as corn. In the 60s and early 70s, India’s wheat yield was higher than China’s.  But after the mid-70s, China’s yield started to outpace India’s and the disparity is the highest in the most recent decade. Even in cotton production, where India has made impressive strides, Chinese production of raw cotton is more than 40 percent higher than in India, and China’s cotton yield is about 2.5 times higher than India’s.

Yield is a function of controlled inputs such as seed quality, fertilizer usage, water, acreage under harvest and mechanization. Crops grown on irrigated land are not dependent on the vagaries of the weather. Steadily, over the last four decades, the amount of paddy crop under irrigation in India has increased and is now about 57 percent. States in which more than half the paddy crop is irrigated have 50 percent higher yield than states in which less than half the paddy crop is irrigated.

One possible reason for India’s low productivity, whether wheat or rice or any crop, is the small size of individual farm holdings. The 2001 census found that 80 percent of farm holdings were less than 2 hectares in size, with 62 percent averaging less than half a hectare. Just 1 percent of the holdings were classified as large (over 10 hectares) and averaged 17.1 hectares.

A more recent government report noted that small farms have gotten even smaller, and that 85 percent of farmers lack access to farm inputs and credit. This is not surprising as the rural population has grown but the available farm acreage has not. However, the average Chinese farm holdings are even smaller, averaging just 0.6 hectares.

Both in China and India, small farm sizes inhibit mechanization. But fertilizer usage is much higher in China than India. In addition, China invests significantly more in agricultural research and development compared to India to produce high-yield and quicker-growing crop varieties. This, along with better irrigation and more intensive cultivation of the land by double or even triple cropping, are the primary reasons for China’s superior yields.

In India, total grain production — which includes coarse grains like millet and barley as well as gram and pulses — has increased over the past decade but has barely kept up with population growth. Per capita net availability of food grains, which factors in production, wastage, exports and imports and change in stocks, averaged 174 kilograms per capita from 1990-1999 compared with 163 kg per capita from 2000-2009.

This is of concern because agricultural land availability has remained about the same over three decades. This means that yields have to improve to produce more. Yields for rice and wheat have increased, as they have for food grains as a whole. But the growth rate in yields are moderating.

Unless input factors, in particular water, change dramatically, the future looks daunting. Double cropping to increase yield is not possible without reliable access to water supply. More than 50 percent of the cultivated land for all crops depends on rainfall.