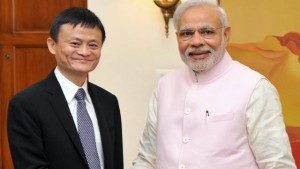 With most of the money pouring into start-ups across China and India drying up, investors are getting a lot more sharp edged and nickel nosed about where they put their money.

China’s slowing economy earlier pushed several investors to India to reap rich dividends from her large population. However Chinese companies now too are second guessing putting their money into India and are rather cooling their heels even as the summer approaches.

Several Chinese companies including Qufenqi, a student loan company owned by Alibaba which was looking at buying into an Indian student loan firm have back tracked and are no longer interested in the Indian market as of now. The only beacon on the horizon seems to be Jack Ma’s Alibaba who are keen to enter India’s burgeoning e-commerce market. India is roughly estimated to be 5 years behind that of China when it comes to the adoption and implementation of new technology. This gives Alibaba a huge head start in implementing strategy for a market similar in size and value to China, and also a great advantage in knowing where the market is headed.

“We are planning to enter the e-commerce business in India in 2016. We have been exploring very carefully the e-commerce opportunity in this country, which we think is very exciting on the backdrop of Digital India,” Alibaba Group President J Michael Evans told Indian media after meeting the Indian Communications and IT minister Ravi Shankar Prasad in New Delhi. In the past 5 years, China has seen an exponential growth in her e-commerce market which is currently ruled by the mobile as a device. In 2011 transactions valued at RMB 6,400 billion took place, China is expected to end 2016 with e-commerce transactions valued at more than RMB 19,900 a more than three fold jump in 5 years. India is expected to see a similar jump in e-commerce and its what Alibaba is hedging its bets on. While shopping will see major gains, mobile advertising and payments are also set to increase.