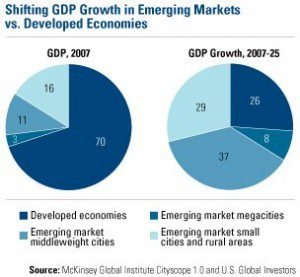 As China and India play tug-of war in re-balancing their economies, Inchin Closer takes a look at the real growth engines in both countries — India’s Middle class and China’s Rural mass.

Birds of Gold as dubbed by the Mckinsey Global Institute, for their ability to sway consumer companies, public opinion and pull the weight of the economy simultaneously, the bulk of our populations, do not only dictate domestic decrees but also international tet-a-te’s. While India’s middle class, also sways political opinion, China’s rural junta doesn’t have this privilege. Yet, this is where the real markets lie, the untapped potential that producers churn factories for and investors pump in money for in the hope that one day, these masses will will reap them rich dividends.

An ambiguous title, India’s middle class is one that is defined on an income parameter which varies depending on which economic group you talk to, similarly, China’s rural masses too vary depending on which social analyst you speak with. Here at Inchin Closer we will look at their economic impact depending on their psychological position of being our real growth engines.

According to the National Bureau of Statistics of China, a 1-yuan rise in per capita consumer spending in the countryside will create a 2-yuan increase in per capita consumer demand for the country as a whole. This indicates that tapping the potential in rural consumer spending will greatly contribute to increasing overall domestic demand and be a long-term driving force for China’s economic growth.

As positive reinforcement, figures recently released by the National Bureau of Statistics, and carried by Bloomberg News, quoted “rural per-capita net income advanced 10.7 percent, compared with 9.6 percent for urban dwellers, partly on the rise in migrant labourers and their wages”. A rise in rural incomes thereby translating to increased purchasing power and strength of the rural masses.

A similar story upholds in India, where government schemes to entice the middle class to increase their purchasing power have led to increasing consumption and thereby economic growth. While India’s middle class is expected to increase ten fold over the next 15 years, she will dictate how the Indian swells.