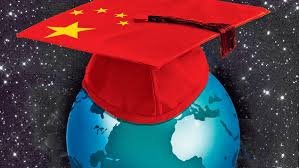 The Gaokao is China’s national, unilateral and highly competitive exam to gain admission into Chinese universities. Highly contested for, the Gaokao is extremely difficult, enabling universities to sift students based on marks obtained and is a highly stressful time for both parents and students.

The same also holds true for Indian students, over the past three years several foreign universities have either signed MOU’s with leading Indian universities or have set up centers in the country. The most recent university being the University of Chicago setting up a center in Gurgaon, a little outside Delhi. The center which will serve as a place of research and collaboration will also seek to enrol more students by strengthening its alumni on the ground.

In Mainland China on the other hand, so far, 26 non-Chinese institutions have set up branch campuses, according to data gathered by the Cross-Border Education Research Team (C-Bert) at the State University of New York at Albany. US institutions have the highest number of campuses, at 11, followed by Britain with four and Germany with three.

The fact that the Gaokao is now gaining acceptance across universities and that many foreign universities are keen on wooing Chinese students, raises a two fold issue – one, will Chinese students now exposed to the best of both educational worlds rule the corporate world? Two, what does it mean for the education system in China which is being admonished?

The first will drastically impact the labour world, where Chinese salaries are already driving up the basic costs of goods. It will also bring in a larger Chinese sense of work ethics into the boardroom as investments will make sure the management is Chinese and education will enure implementation of Chinese work culture at many western owned businesses. Will an amazon start operating like a Taobao, or an Ericsson like Huawei? How will this impact the corporate world, the way businesses is done or the way deals are struck? Will guangxi become a norm and sitting down and understanding your business partner be the done thing rather than just signing a contract and moving on with life?

Or will Western best practices be merged into Eastern work ethics to create a healthy juggalbadhi where the optimum from both worlds is adopted to create a merged corporate way of working?

According to a report by the Ministry of External Affairs, the last few years have seen a significant increase in the number of Indian students choosing to study in China. While in January 2012 there were over 8,000 Indian students studying in various Chinese universities, in 2013, this number increased to 9,200 — 15 per cent more.

Yatindra Joshi, who recently completed his MBBS from the Chonquing Medical University in China, told the Hindu, Pursuing medical education in India these days is becoming difficult for most students. China, on the other hand, offers admission based on Class XII results and a much better academic environment at a far lower cost. There is an emphasis on research and an excellent faculty. In fact one of my professors was a Nobel prize winner.”

The questions are endless. The system is changing and her verdict is in our hands, we are the youth, we could potentially sway this in either direction, alter the corporate structure of the future and change the way local universities conduct their business, professors teach or how our children learn about the world around them.