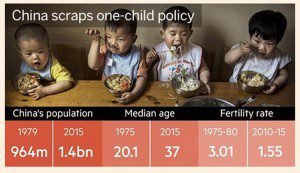 Two weeks before China celebrates her singles day on 11/11, Beijing announced that she was going to abolish the one child policy altogether. Enforced in 1979 to curb China’s growing population and ensure a good standard of living for a nation aspiring to excel, the one child policy brought in sweeping changes for Beijing.

However 68 years later, having reduced China’s population by almost 400 million child births (the estimated prevented births if the policy wasn’t in place), President Xi Jinping and his team decided to abolish the rule in order to boost the working age population for the next generation. The fear that China would get old before she gets rich held true and Beijing was finding it hard to pay retirement bills with a falling number of workers. The country’s working age population fell 3.71 million in 2014.

The United Nations projects that China will lose 67 million workers from 2010 to 2030. At the same time, China’s elderly population is expected to soar from 110 million in 2010 to 210 million in 2030, and by 2050 will account for a quarter of the population, according to the U.N. China’s population, the world’s largest, rose to 1.34 billion in 2010, according to census data. Additionally, social unrest was growing with a large number of unmarried men and women who had to work doubly hard to support extended families admist growing consumption levels.

Most analysts feel that the policy which was phased in over several years will have little impact. Earlier, minorities, farmers and couples both of whom were single children were permitted to have more than one child, however almost 90 percent of this population choose against having two children. Going by this precedent, the change in policy will not alter China’s population drastically as many fear huge economic expenses.

The chunk of China’s middle class is still trying to make ends meet, a second child will add a huge burden and will crush growing aspirations of consumption. The economic and social ramifications of the policy which was seen by the West as the communist party involving itself in China’s families will be significant. As China moves up the value chain, her growing population will consume more, produce more and command a larger, stronger presence worldwide.

The family unit will be more balanced without all the pressure falling on a single child and societal harmony will return to China. While resources will be strained, Beijing will also have a massive healthcare issue to monitor. Checking on women was one way the system sought to ensure healthcare in rural areas. Without government control now, rural healthcare might become a larger beast of burden. All in all, the abolition of China’s one child policy will have sweeping changes not just for the world’s highest populated country, but for everyone globally.