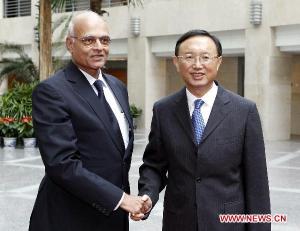 Strengthening bilateral ties, China and India on Monday agreed to collaborate better on economic and cultural issues, broadening their cooperation base. The two nations agreed to not only continue to boost bilateral trade and support each other at global forums, but also discussed opening up new areas of economic co-operation internationally — specifically, working together in Afghanistan on infrastructure projects and in developing the country’s mineral resources.

The two countries “talked about the possibility of cooperating in certain subjects in other countries, whether three-party or four-party collaborative projects in the economic field as well,” Chinese Foreign Minister Yang Jiechi told the Hindu, after hour-long discussions.

As the two nations compete globally for natural resources to boost energy security in their respective countries, analysts deem it profitable for both nations to mutually explore opportunities worldwide. The Afghan government, comfortable with working with both India and China is also keen to develop its vast mineral resources. Until now, India has already invested more than US$1.3 billion in infrastructure projects and in other areas in Afghanistan. Meanwhile, China has taken far greater strides in tapping the country’s mineral deposits, including a recent US$4 billion bid to develop a copper mine at Aynak.

Furthermore, the most significant outcome of Shiv Shankar Menon’s talks with Yang, is that the tone of the talks was positive, an indicator to India that China is keen on strengthening the sino-indian dialogue. As neighboring China’s power rises globally, a healthy bilateral relation between the two nations remains at the heart of negotiations. India and China have several trust issues which yet need to be resolved, including a disputed border, anti-dumping tariffs, political distrust and a lack of cultural exchange.  Shiv Shankar Menon, whose uncle was also an Indian Ambassador to China, is the only Indian diplomat who could’ve smoothened ties with China, and he seems to have succeeded.

“What is more important is that the overall tone [now] is very positive and there is a lot in common between us,” Mr. Yang added to the Hindu. “I believe this visit will pave the ground, to a large extent, to further our strategic partnership.”

Citing greater collaboration on climate change and in multilateral fora, he said the two countries had “enhanced [their] mutual political trust.” “If you look at the G20, or climate change, or BRIC meetings, we actually work very closely together to push forward a common cause; that is, to serve the interests of our respective people, the interests of the developing world, and the interests of mankind as well,” Yang told the Hindu.