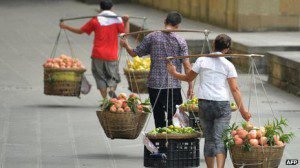 Both India and China saw a seven month spike in inflation rates in the ninth month of this year. Reuters reported on both nations – China’s annual consumer inflation rate rose to a seven-month high of 3.1 percent in September as poor weather drove up food prices, limiting the scope for the central bank to maneuver to support the economy even as exports showed a surprise decline. Inflation in India unexpectedly hit a seven-month high in September as food prices climbed, increasing the odds for yet another central bank interest rate hike even as the economy stumbles through its worst crisis since 1991.

With spending on food being the prime expense of an average Chinese and Indian’s disposable income, this hike in inflation rates is sure to pinch the common man. In India where menu’s have already altered to keep out the once essential onion, consumers are gaining extremely weary of what they eat. Prices of onions jumped 322 percent annually as crop supply dropped and wholesale merchants hoarded the bulb for higher prices.

Food prices in India rose to an annual 18.40 percent last month, the fastest clip since July 2010 and triple the 6.1 percent rise seen in China, according to Reuters. In China, Food prices gained 1.5 percent in September from August due to droughts and floods in some areas, pushing up the CPI by 0.51 percentage points, Yu Qiumei, a senior statistician at the bureau, said in a statement.

Although India is much more worried about her inflation figures than China, both economies are counting on a slow growth to curb rising prices. This just might be the only silver lining to their economic cloud of gloom. While exports fell in China and Beijing saw the lowest growth in 20 years of 7.8 percent, the country is hoping to stabalise the economy and reign in prices as the country shifts from a low cost destination to one thats value conscious.

Similarly in India, Delhi is hoping the slowing economy will cool demand driven price pressures, thereby easing inflation rates. Its economy grew at an annual rate of 5 percent in the 2012-13 financial year, the slowest pace in 10 years. Further, with the rupee having recovered from its lowest hit in August and the monsoon a prime indicator of the strength of the future economy being good, prices are expected to stabalise once again.