Close
China: For or Against Indo- Myanmar associations?
May 29, 2012 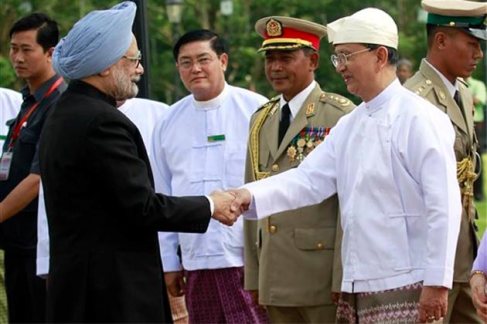 India signed twelve deals with Myanmar on Monday, including an agreement to provide the latter with a $50 million credit. For the first time in 25 years, an Indian prime minister paid a visit to Myanmar. Dr. Manmohan Singh and the President of Myanmar Thein Sein discussed strategies to battle terrorism and security issues as well as to give impetus to trade.

Barely a day after having made its apprehensions known, China seems to have changed its stance to supporting the relations between the two.

China has long been wary of the ties between India and Myanmar, especially since the release of democratic leader Aung San Suu Kyi in November 2010 after 15 years of house arrest and the Burmese Democratic Reforms in 2010- 11. As it finally breaks out of military rule, Myanmar stands to become increasingly less dependent on China in terms of diplomatic, economic and military support. As reported by the International Crisis Group, “an over-reliance on China has been of growing concern to many in the Myanmar political establishment”. While the Burmese are jubilant at the steps taken to shake off China’s strong hold over it, such as the cancellation of the $3.6 billion Myitsone dam project, citing environmental concerns as the issue, the latter is less than happy about its diminishing power over the former.

Now, however, China seems to be ‘happy’ to see its two neighbours involved in joint ventures.

Rubbishing reports which allege China’s anxiety at the developing ties between the other two nations, China maintains that the two has its support. Said Foreign Ministry spokesperson Liu Weimin as reported by The Hindu, “Both India and Myanmar are China’s friendly neighbours. China is happy to see the development of friendly relations between India and Myanmar, and we hope such development of friendly relations will be conducive to the stability and prosperity of the whole region.”

“China- Myanmar and India- Myanmar relations are an integral part of bilateral relations between China and India. They should properly handle some differences and disagreements in the process of developing outward,” said Song Quinrun, a Myanmar studies researcher with the China Institutes of Contemporary International Relations, as reported by China Daily.

Could this be because the Chinese have shifted their focus from India to the US as a potential threat to Chinese interests or is China simply being in a ‘love thy neighbour’ spirit?