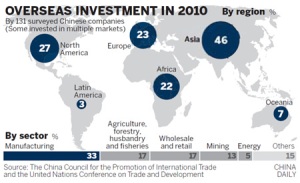 By the end of 2011, China’s cumulative non-financial overseas direct investment (ODI) totaled US$322 billion, according to data from the ministry of Commerce. Nearly 70 percent of that went into projects in the Asia-Pacific region. In its 12th Five-Year Plan (2011-15), China is encouraging qualified and capable Chinese companies to invest overseas.

Delivering the government work report at the fifth session of the 11th National People’s Congress which started on Monday in Beijing, Wen said China will implement the “go global” strategy this year.

According to Wen, China will guide its enterprises under various forms of ownership in making overseas investments, mergers and acquisitions in energy, raw materials, agriculture, manufacturing, service industries, and infrastructure in an orderly manner.

The booming economies of Asia, beckon international investments especially from flush with funds countries like China. India, Indonesia, Vietnam, Thailand and Myanmar are some of the neighbors China has been investing substantially in. Seeing a two fold benefit, China is looking at reaping long term results from these investments. Firstly, as these economies prosper, China’s return on investments is expected to rise manifold, secondly, by investing in a host of countries growth story now, China ensures that it will have a huge market in the coming years, which will also indirectly boost the Chinese economy.

Lately, according to analysts, economists and executives, companies and cash-flush investment funds from China, India, Brazil and the United Arab Emirates are adding to their baskets of European assets and are on the prowl for fresh investments in infrastructure, technology and manufacturing across the European Union.

In 2011, Europe for the first time edged out the United States as China’s biggest region for overseas investment. So far this year, China’s European deals have included the Shandong Heavy Industry Group’s purchase of a 75 percent stake in the Italian yacht maker Ferretti, and the State Grid Corporation of China’s buying 25 percent of Portugal’s electric utility

In their neighboring developing countries, China has largely invested in the labour intensive industries of manufacturing and resources. “Not only do you create employment and generate goodwill, but you also create exports,” Dr. Chunlai Chen of the Crawford School of Economics and Government at the Australian National University in Canberra told the China Daily Asia Weekly. For example about 98 percent of the employees in Huawei’s India office are locals and the telecom giant sources equipment worth US$500 million from local vendors.

“We are building a platform for more Chinese companies to better develop their business,” says Yu Ping, Vice Chairman of China’s Council for Promotion of International Trade. We provide information before they go and help them to understand the local culture, he added. Nonetheless, Chinese companies have also been continuously challenged with how to buy abroad, and an unfavorable political environment in foreign nations has made it difficult in many cases for Chinese companies to win bids.

While  China has been aggressively investing in Asia, Australia and Africa, India is also expanding her influence in similar territories. “Economic prosperity at home has given cash and confidence to Indian (emerging market) companies and many have been quick to make significant investments outside their shores,” Infosys chairman K V Kamath said. Tata, one of India’s largest conglomerates recently announced doubling its investments into British brands Jaguar Land Rover which it had acquired in 2008. Infosys, the big Indian technology consulting and outsourcing company too, plans to invest millions in additional investments in its core northern European markets, and is girding to hire hundreds more people in Europe this year.