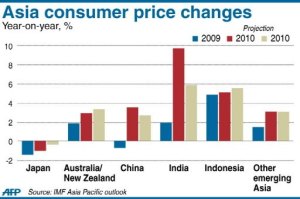 While maintaining that India, China and Indonesia will maintain high growth levels next year and will continue to lead the global economy out of its doldrums, the International Monetary Fund has expressed its inclination towards  strengthening Asian currencies to deter potentially dangerous hot money inflows and help correct global trade imbalances.

Rebalancing currencies, will be the hotly contested topic when Finance ministers from the G20 group of leading economies meet this weekend in the South Korean city of Gyeongju. Even though the very reputation of the G20 as a group is at stake, a firm resolution is not expected immediately, the finance ministers are however keen to reach a consensus, which is expected to be ratified later when the G20 leaders meet in Seoul on November 11.

China, which has long been the target of criticism from the US and others over its alleged manipulation of the renminbi, has warned against any attack against Beijing at this G20 meeting. “This will show a divided G20 to the international community. This will certainly not boost up market confidence in the G20,” Cui Tiankai, China’s representative to the G20, told the Financial Times last week.

The US, which itself is under fire from some in emerging markets over the recent plunge of the dollar and suffers a massive trade imbalance with China has been urging the Middle Kingdom to price its currency, the yuan according to more market determined forces.  However, China which briefly depegged its currency from the dollar in mid-June, raising the yuan by 2.6 percent  and is undergoing massive social, political and economic reforms to boost domestic demand isn’t keen to make imports cheaper.

Meanwhile, other BRIC nation members are also supporting China. While Brazil has boycotted the G20 summit, sceptical about the US initiative, Dimitry Pankin, Russian deputy finance minister, said  “The United States will try to put the question of exchange rates and current account balances at the top of the agenda, to try to press China to make some commitments on this issue. In my view it is unlikely that they will succeed,” he told reporters. “Most likely, there will be some general words, along the lines of ‘let’s all live in peace’. I do not expect much success in this sphere.”

Indian finance minister Pranab Mukherjee, has taken a more sublime stance on the issue, taking into account India’s hot and sour relationship with China as well as bonhomie at international conferences, he said  “I do not believe in confrontation.I believe in dialogue. If the issues are to be resolved, it should be through the dialogue amongst the parties concerned.”

Nobody expects the G20 currency communique to resolve the issue anytime soon, with the very relevance of the G20 at stake, currency as the political tug-of-war tool between the world’s two largest economies is expected to hold fort for a while – atleast until it serves both their purposes.