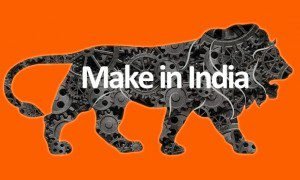 Taking a leaf out of China’s development handbook, India launched her “Make in India” week on Monday with much fan fare. Inspired by Germany’s annual Hannover Messe, India’s Make in India week is New Delhi’s effort to bring India’s manufacturing sector on par with her services sector, generate jobs and ease imports.

Estimated to create a 100 million jobs and increase manufacturings contribution to the national output to 25 percent from the current 17 percent, the initiative is a massive nationwide drive to boost manufacturing in India.

China’s manufacturing sector in comparison contributes 35 percent to the GDP. Initiated in 2014, ‘Make in India’ is a flagship of the Modi regime. The main objective is to develop a Chinese-style global manufacturing and export powerhouse that will make India one of the top 50 nations in the world on the World Bank’s Ease of Business ranking.

Currently, India stands at 130. In comparison to her sweet and sour neighbour, India’s desire to propel manufacturing comes from weak industrial data. Never a manufacturing powerhouse, India is now keen to increase factory output and industrial production. However in order to do this and bring in fresh investments, New Delhi needs to cut the proverbial red tape and lay out the red carpet instead. Like China she needs to give funds at affordable rates, offer cheap inputs and provide world-class infrastructure. In addition, she will also need to bring in technology, regulate environment norms and create skilled talent to attract both domestic and international manufacturers.

While some companies such as BAE systems announced they would partner with Mahindra, few companies including Indian companies that have set up plants internationally have bit the bullet and agreed to invest in Indian manufacturing.

Additionally, the Indian stock market reflected a lackluster attitude towards the Make in India week as listed Manufacturing companies lost out on account of poor earnings and bleak global economic outlook. Nonetheless, the Indian government is roaring in the right direction. In order to support the Make in India week, in parallel New Delhi has also begun multiple initiatives such as Start-Up India, Skill India and Digital India to boost manufacturing. The convergence of these initiatives is to create a long term ecosystem for India to build up and sustain a vibrant manufacturing sector.

Taking another leaf out of China’s development handbook, India has also created 338 parameters such as availability of a single window for approvals, ease of getting construction permits, enforcing contracts and labour and environment compliance to compare her various states on. The hope is that states will compete and share on best practices to emerge first. Last year, Gujarat topped the list followed by Andhra Pradesh and then Jharkhand.