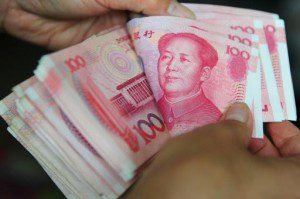 China’s devaluation of the Ren Min Bi or peoples currency is expected to have a less than dramatic effect on the Indian economy – the most affected sectors being textiles, metals and chemicals.

While the yuan becoming cheaper against the dollar will mean that Chinese exports rise, slightly spurring the economy, analysts expect it to have little impact on the Indian economy as the two little compete for much in the global economy. Brought on by a move from Beijing to delink the yuan from the dollar and change the currency’s reference rate, the Peoples bank of China has taken a baby step towards making the yuan an international currency.

In the short term what experts are worried about though is that it will tilt the basket of goods further in favor of China, increasing the already yawning trade deficit between the sweet and sour neighbours. The widening gap in trade has historically always led to pressures both external and internal on the Indian government, which lends itself to often damaging international relations with China. With the Indian government already balancing under bad loans hoarded on Public Sector Banks, the Reserve Bank of India will need to take drastic measures to maintain a 7+ percent GDP growth this year.

India’s trade deficit with China has almost doubled from US$25 billion in 2008-09 to US$50 billion in 2014-15. And China’s share of India’s total trade deficit is up from just under 20 percent in 2009-10 to 35 percent in 2014-15. On a more micro scale, the yuan’s devaluation is expected see cheap Chinese goods flood Indian markets just prior to the festive season in November, leading to a flurry of sales and competition for local Indian players. But this is expected to have minimal impact on the Indian economy as a whole as it is contained within SME’s and doesn’t sway the economy.

For China, a currency devaluation is the perfect antidote to the ailing economy, especially coming straight on the back of the stock market slide. The move fits right into Beijing’s plans of cutting dependance on imports and increasing exports which will not only temporarily boost the economy, but will also weed out all the less high value goods which China has so desperately being trying to offload.

While essentials like oil and crude prices will increase, the impact will be muted due to a combination of weak demand and new supply from Iran. So the risks in terms of energy inflation don’t seem high. Besides providing a boost to exports, the PBOC’s action seems to have been driven by China’s desire to be included in the International Monetary Fund’s (IMF) Special Drawing Rights (SDR) basket that at present includes the dollar, euro, pound and yen. In a recent report, the IMF had highlighted difficulties in including the CNY in the SDR basket until greater market reform enabled a reduction in the divergence between onshore and offshore rates.

Unlike currency issued by national central banks, the SDR is a unit of account issued by the multilateral IMF to its 188 sovereign members, in exchange for their national currency (not necessarily convertible) and other convertible currencies. The SDR can be counted as part of their foreign exchange reserves and can work as collateral ie member countries can even draw on the SDR account like an overdraft, in case they need more foreign exchange. In short, the move would be a step towards making the RMB a more international currency as the IMF’s member country’s could hold the yuan as an asset. The move would drastically alter international trade and boost China’s position in International affairs. Going forward, the yuan is expected to further depreciate as its estimated to be overvalued by 30 percent with 2010 as the base, according to the Bank of International Settlements (BIS). However a free fall isn’t on the cards as the Chinese economy is not in a position to absorb the costs of unrestrained depreciation. China does currently control 10 percent of global trade.