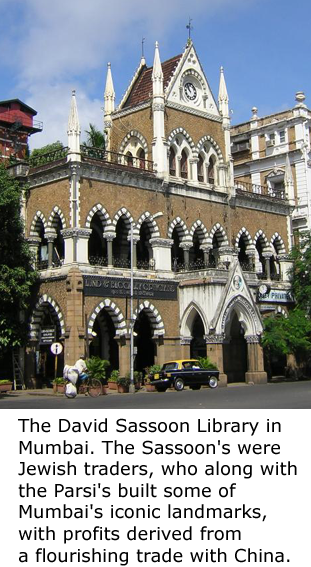 Wealth derived from selling the Chinese opium during British colonial rule, helped build many landmarks on India’s west coast. The Mahim Causeway, The Sir JJ School of Art, David Sassoon Library and Flora Fountain, landmarks in modern Mumbai, were built by prominent Parsi and Jewish traders from profits made by a flourishing opium and later cotton trade with China.

Prominent families from Mumbai’s past, names that adorn today’s famous institutions such as the Wadia’s, Tata’s, Jejeebhoy’s, Readymoney’s, Cama’s and Sassoon’s sold opium to China through the British. By the end of the nineteenth century, when the opium trade went bust, cotton from India’s western state of Gujarat, which had already developed strong trade links with Canton profited. The Paris’s ploughed profits from the trade with the Chinese back into India, setting up several schools, hospitals and banks. Historical records prove that some of India’s prominent Parsi traders at the time, were founders of the Hong Kong and Shanghai Banking Corporation (HSBC)  founded in 1865.

In fact, little reported, but between the ancient silk route and today’s booming China-India trade, commerce between the two civilizations flourished from the last quarter of the eighteenth century to the first quarter of the twentieth century.   Famed for financing the JJ School of Art as well as many public works such as wells, reservoirs, bridges, and causeways, the most famous China merchant was Jamshetjee Jejeebhoy. Sir JJ, along with his contemporaries, is today credited with establishing several factories and ports, all of which were Mumbai’s engines of growth until the 1980’s.

The booming China – India trade during the Colonial period not only influenced industry but people and culture in both nations as well. Many Indians tired of British subjugation moved to south-west China and Canton, similarly, the Chinese disheartened by domestic imperialism moved to north-east India, mostly settling in Calcutta.

Blue Chinese vases and plates made their way into the homes of many, Chinese silks, jade and paintings were also available. Chinese motif’s began to appear on the silk Gara sari’s worn by Parsi women. The Tanchoi sari, now associated with Varanasi in Uttar Pradesh too has its origins in China. As the story goes, Jamshetjee Jejeebhoy sent his three brothers – the Joshi’s from Surat to China to learn how to weave satin brocade. The name Tanchoi comes from the word Tan meaning three in Cantonese and Choi, the surname of the teacher that taught them the craft.