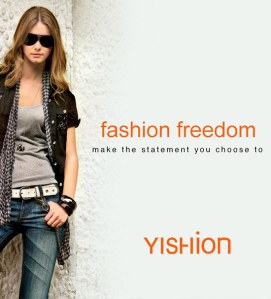 Chinese retail major Yishion will be one of the first Chinese fashion brands to enter the Indian market when it opens doors to its flagship store in New Delhi this September. The US$12 billion fashion retailer plans to open least 125 points of sales, including ten exclusive stores and multi-brand outlets, across India by 2012. India will be the 20th Asian country that Yishion has a presence in.

While foreign companies are still restricted from entering the Indian retail sector, they are allowed to form 51:49 joint venture for single brand retail operations. Yishion which will sell all its apparel under its own brand has entered into a Joint Venture with Delhi-based marketing and distribution firm Upmarket Group and together formed Hongluan Trade India Pvt Ltd for their Indian foray. The final investment plans are still being worked out between the two JV partners while the company awaits approval of Yishion’s global registration from the Indian Government.

Yishion, which will source entirely from China for the Indian market will initially retail men’s and women’s wear at a price range of Rs 800-Rs 3,300. The company will later expand their range to kids’ wear, footwear, accessories and handbags. The company expects revenues of Rs 15 crore within the first year of operations in India.

Yet, India and China have had a long history of fashion exchanges. The gara sari’s worn by modern Parsi women in India today is inspired from the Chinese and so is the tanchoi. More recently, China being a large textile hub, many Indian designers are sourcing some of the best silks and mix blend materials for their creations from China.