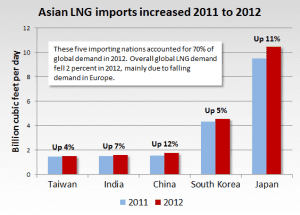 Unsupported by a will to aggressively bid for energy projects, Indian public sector power companies are loosing out heavily to Chinese companies in securing energy assets internationally. At a time when countries are increasingly going green on gas and de-nuclearising their energy stores, the competition to acquire LNG assets internationally is heating up.

In its latest endeavor, according to the Hindu, China National Petroleum Corporation signed an agreement with Russia’s largest private gas producer Novatek to acquire a 20 percent stake in the latter’s LNG project in Yamal Peninsular in the Arctic region of northeast Siberia, and to secure long-term LNG supplies from the plant to be built in 2018. The same day, another Chinese company, Sinopec, also signed a contract with Russia’s State-owned Rosneft for the supply of 365 million tonnes of crude over the next 25 years at a cost of US$270 billion.

China’s imports are expected to rise about five fold, to 46 million tonnes it imported in 2020 from about 9 million tonnes in 2010. India’s demand for energy is also growing at an annual rate of 5-6 percent, the government says. India is the world’s sixth largest liquefied natural gas importer. High demand for city based gas distribution, automative and steel plants to fuel her infrastructure investments, in addition to the conventional power and fertilizer sectors, India is expected to more than double her gas imports in 2013-14 as compared to the previous financial year, due to a shortfall in domestic supply. However lackluster domestic exploration results give little reason to expect a turnaround at home. Geopolitical hurdles to pipeline supplies through fractious neighbours like Iran, Pakistan and Afghanistan have made LNG only serious source of supplies. To cope with rising imports, India plans to spend billions to increase the capacity of import terminals for LNG to 26 million tonnes per year from from 13.7 million. Existing terminals are operated by Petronet and Royal Dutch Shell.

Besides Russia, India is currently in talks with Qatar a long standing supplier of LNG to India. Qatar’s RasGas has been India’s sole long-term supplier of natural gas, with two contracts for a total of 360 billion cubic feet. The South Asian nation has also signed a supply agreement with Houston’s United LNG to supply a minimum of 4 million tons of LNG a year to India’s Petronet for 20 years via the Main Pass Energy Hub in the Gulf of Mexico. The agreement although yet needs to be ratified by the U.S. Energy Department gaining approval for LNG exports to non-FTA countries. “If the approval is in place to sign the binding agreement by the end of this year, then we hope supplies to start by 2018,” Petronet finance director, R.K. Garg told Platts.

While demand for LNG remains high in India, the nation unlike her neighbour has netted few deals to cover demand. Leading to last minute spot buying of gas at high prices which increase public debt.

Over the past decade, India has bid for and won some projects however they have ended up being highly unprofitable. In 2001, Indian OVL acquired a 20 percent stake in the Sakhalin-1 hydrocarbon block for US$1.7 billion, Imperial Energy, which OVL successively bought in 2009, has proved a liability, as production keeps falling, with a further 17 per cent decline to 5,12,900 tonnes planned for this year.

Other investments too have gone sour, as reported by the Hindu – Indian energy companies have signed four preliminary deals  with Russia’s Gazprom for annual supplies of up to 10 million tonnes of LNG for up to 25 years. But so far only one deal has been firmed up, with GAIL India signing a 20-year contract with Gazprom last October for the supply 2.5 million tonnes of LNG. Consequently, India is also seeking a stake in Sakhalin-3 oil and gas project and in an LNG project Gazprom plans to build in Vladivostok.