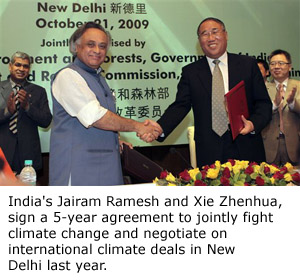 This is the first multilateral meeting of a negotiating block after December’s Copenhagen summit. The widely criticised Copenhagen Accord is a non-binding document formulated by a small group of countries on the final day of the talks as the meeting faced collapse. It sets a broad goal of limiting global warming to two degrees Celsius (3.6 Fahrenheit) but does not specify ways of achieving this goal. Instead, countries are being urged to identify what actions they intend to take, a binding deal is expected to be brokered at the end of this year in Mexico.

At Copenhagen, India, considered the world’s fifth largest Green House Gas emitter, said it was prepared to cut its carbon intensity by 20 to 25 percent by 2020; China, now ranked as the world’s largest polluter, by 40 to 45 percent; Brazil, by as much as 39 percent; and South Africa, by 34 percent.