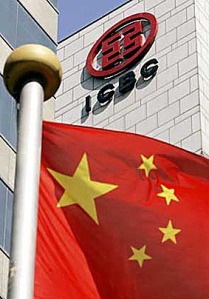 The worlds most valuable lender the Industrial and Commercial Bank of China better known as ICBC inaugurated their first Mumbai branch office today. Their first step into India, ICBC received a business license by the Reserve Bank of India (India’s Central Bank) for a branch in Mumbai in May this year.

The Bank which recently reported over RMB 100 billion in post tax profit for the first half of 2011, aims to take advantage of its large customer base, financial strength, network and technology to play a bigger role in serving the trade and economic ties between China and India, and facilitate the economic development of India.

As an increasing number of Indian companies seek to take loans from Chinese banks, ICBC’s entry into India marks a significant step towards closer and strengthened China-India trade ties. India’s State Bank of India gained access to lend in yuan in March, 2010. More recently Chinese power equipment companies have made it mandatory for Indian firms which now depend so heavily on Chinese power and telecom equipment to borrow funds from Chinese banks to finance equipment purchases. The deal allows Indian firms strapped for cash to bring the equipment to India and opens up the Indian market for Chinese equipment vendors who until now have been wrapped in red tape.  ICBC’s presence in Mumbai will also aid the finances of Chinese companies looking at conducting and expanding their business operations in India.

ICBC currently has offices across North America, Europe, South-East Asia, South Asia, the Middle East and Australia. It is listed both on the Hong Kong and Shanghai Stock Exchanges.

Under India’s commitment to the World Trade Organization, the central bank has to allow at least 12 foreign banks to open local branches every year. In recent years, the Reserve Bank of India has allowed between 17 and 18 such branches annually. Banks get an initial license to open their first branch and then have to apply each year to open more branches.

There are currently 33 foreign banks in India with 316 branches, according to data from the Reserve Bank.