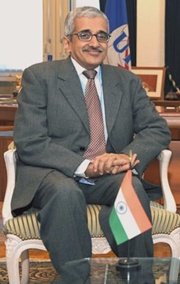 In a move that gives India a slight edge over China at the United Nations, India’s Permanent Representative to the UN offices in Geneva A. Gopinathan defeated Zhang Yan, Chinese Ambassador to India, to assume a place at the United Nations General Assembly for the lone seat on the UN Joint Inspection Unit from the Asia-Pacific region India will be returning to this powerful external oversight body after a gap of 35 years. India got 106 votes out of the 183 polled, while China secured 77 votes. India has served only once on the JIU 35 years ago from 1968 to 1977. China had held its seat for 10 years and its term was to expire in December 2012.

Expected to boost India’s campaign for a permanent seat on an expanded UN Security Council, the win gives the South Asian nation additional clout and boasting rights on a global scale. India’s win at the Security Council was not a “flash in the pan”, adding to its win at bodies like the Advisory Committee on Administrative and Budgetary Questions, ECOSOC, Human Rights Council and the International Law Commission, the JIU will give it the fuel it needs to race to the permanent seat at the UN Security Council.

“We are thrilled. The important thing is that this was a straight contest because it involves a country which is the world’s second largest economy and which has growing diplomatic reach,” India’s Permanent Representative to the UN Ambassador Hardeep Singh Puri told the Hindustan Times.

The JIU is an independent external oversight body of the UN system, mandated to conduct evaluations, inspections and investigations system-wide. The JIU is a standing subsidiary organ of the General Assembly with a mandate covering the UN, its separately administered funds and programmes, and the specialised agencies that have accepted its statute. It is composed of not more than eleven inspectors serving for a term of five years, renewable once.

Gopinathan was India’s Deputy Permanent Representative in New York from January 2002 to September 2005.

He has also served as Joint Secretary (UN) from August 1997 to December 2001 at the Ministry of External Affairs.

In a pamphlet distributed extensively as part of its global campaign for the election, India touted Gopinathan’s credentials saying, “Having devoted almost half of his diplomatic career to UN-related work, ambassador Gopinathan’s extensive knowledge and wide experience across the UN system
will enable him to make important and effective contributions to the work of the Joint Inspection Unit and help bring about improvements in the UN system in the areas of oversight and governance, an objective shared by all UN member states.”

It went on to say that “in the current global climate of persisting economic crisis, the need for realising greater ‘value for money’ by streamlining the functioning of the UN and its specialised agencies, improving the quality of services and systems of delivery and ensuring optimal synergy and co- ordination within the UN system cannot be over-emphasised.”