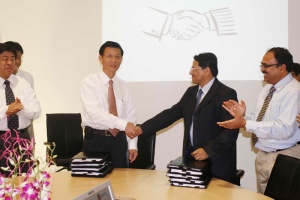 Riding on mass skepticism from the Indian politibureau on Chinese power equipment generating energy in India, Shandong Electric Power Construction Corporation, a unit of State Grid Corp of China, the nation’s largest grid operator on Friday signed a US$1.5 billion deal with Vedanta Resources an Indian mining group led by industrialist Anil Agarwal to build a thermal power plant in the Eastern state of Orissa.

According to the contract, three 660-megawatt generators will be designed, built and operated by the Chinese. Equipment for the project will be manufactured in China and is expected to result in 7 billion yuan (US$1.02 billion) worth of imports for India.

This is Vedanta Resources third contract with the SEPCC. In May 2008, SEPCC signed a deal with India Sterlite Energy Limited, a subsidiary of Vedanta Resources to build two power plants each with a 3x660MW coal-fired power generation capacity. Earlier in August 2007, Bharat Aluminum Company (BALCO), a subsidiary of India Sterlite Energy Limited had signed a deal for four 300MW coal-fired power plants.

India has a power generation capacity of 153,000 mw and expects to add an additional 62,000 mw by 2012. The country’s largest power equipment manufacturer Bharat Heavy Electricals Ltd (BHEL) has annual capacity of 10,000 mw and is planning to expand its capacity to 20,000 mw. In order to compensate for the lack of power equipment in a nation that is electricity starved, India decided to import Chinese power equipment which is installed faster and at a cheaper rate than domestically produced power equipment.

However political instability and security concerns has led New Delhi to reduce their reliance on Chinese power equipment manufacturers. A plan panel set up by the government has suggested a stop-gap idea for private Indian vendors to set up new capacities and manufacture spare parts for Chinese equipment, until domestic companies can meet the demands of the power sector. Nonetheless, considering the current inability by BHEL to meet the demand, Indian power generation companies have placed orders worth 44,000 mw with Chinese firms.