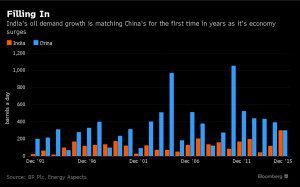 A tectonic shift is taking place between India and China and its becoming obvious by the subtle changes in oil consumption.

According to a report by The Oxford Institute for Energy Studies this month India’s oil demand grew by 300,000 barrels a day last year, double the average rate in the previous decade while China’s growth has slowed to 300,000 barrels from an average 500,000 barrels in the decade to 2013. The shift heralds not only a change in the domestic economy with China moving higher up the value chain, becoming more conscious of her environmental footprint and increasing her services sectors, but also signals clearly that she will no longer be swayed by oil politics.

The oligarchy of oil, means that with a drop in demand and consequently in price, China was able to alter the economies of oil producing nations such as Saudi Arabia and Iraq which gave her a foothold in international politics.

While the shift has been gradual, the change is substantial to highlight that oil producing nations will now play into India’s hands as she holds the reigns on higher oil consumption.

Foreseeing this is also probably why Rosneft,’ Russia’s largest oil company, has decided to sell nearly half of the largest oil deposit in Eastern Siberia to Indian investors. The company has ceded 49.9 percent of “Vankorneft” shares to a consortium of Indian public sector oil majors.

Of these, the Oil and Natural Gas Commission (ONGC) will get 26 percent of the shares, while 23.9 percent will go to Oil India Limited (OIL), Indian Oil Corporation (IOC) and Bharat Petroleum (BPL). ‘Vankorneft’ owns a deposit with 500 million tons of oil and condensate reserves and 182 billion cubic meters of gas, reports the Rosneft press service.

Rosneft is betting on India because in 2015 India’s GDP grew by 7.4 percent, while China’s economy grew by 6.9percent and with a shift in oil consumption, India can soon be the world’s largest energy consumer. According to Indian press, the transaction will be worth approximately US$3 billion.

If the deal goes through, it will be the largest one in the oil and gas sector in recent years. As living standards improve, Indians are buying more cars and the government is looking to boost the share of manufacturing in the country’s gross domestic product, which traditionally has been services-led. Diesel consumption increased 6.4 percent in the first 10 months of the financial year ending March 31 compared with the same period a year earlier, while gasoline use has risen about 14 percent, according to data from the nation’s oil ministry. The International Energy Agency estimates India will consume 4.2 million barrels a day of oil this year, surpassing Japan’s 4.1 million barrels.