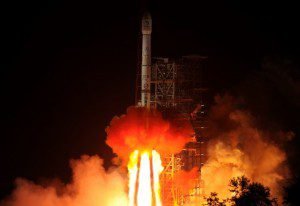 India’s first mission to Mars – Mangalyaan was given a skeptical send off by the Chinese, yet by successfully leaving the earth’s orbit on December 1st 2013, it joined an elite ring of nations – the United States, Europe, and Russia, whose probes have orbited or landed on the red planet.

China, a keen competitor in the space race, launched the Jade Rabbit a day after India’s maiden Mars mission left Earth’s orbit on its journey to the Red Planet, in what some observers characterize as Asia’s new space race. The  probe gives China the possibility of putting a man on the moon sometime after 2020 and aims to become the third country to achieve a soft landing on the moon, after the United States and Russia.

For India, “Getting to Mars is a big achievement,” said Mayank Vahia, a professor in the astronomy and astrophysics department of the Tata Institute of Fundamental Research in Mumbai. The Mars probe will study the planet’s surface and mineral composition, besides sniffing the atmosphere for methane, a chemical strongly tied to life on Earth.

India’s mission which was launched amidst huge national fanfare and pride in building a low cost probe, is a significant step in a nation which prides her scientific prowess. India’s Mars mission cost 4.5 billion rupees (US$73 million), just over a tenth of the cost of NASA’s latest mission, which launched on Nov. 18.

India launched its space programme 50 years ago and developed its own rocket technology after Western powers levied sanctions for a 1974 nuclear weapons test. Five years ago, its Chandrayaan satellite found evidence of water on the moon.

The Middle kingdom’s quest to know more about the moon is based on her thirst to discover the satellites minerals and raw materials for newer energy resources. “Now nobody is exploiting the resources because the economic costs are too high,” Ouyang Ziyuan of the Chinese Academy of Sciences told Xinhua. “This is a possibility in the future, and humans should know what is there on the moon.”

China’s rover to the moon is called “Yutu” in Chinese, and is named after a Chinese myth about a woman named Chang’e who swallowed magic pills and took her pet rabbit to the moon, where she has been living as a goddess ever since. The rover will set up a telescope on the moon for the first time, survey its geological structure and look for natural resources through a radar, Xinhua reported.