In a bid to catch up with China in Africa, India is hosting the third India-Africa Trade summit in New Delhi between 26 – 29th October. The trade summit will seek to increase Indian investments into Africa, a feat China has been pursuing since the early 2000’s. New Delhi however woke up to the continent only after the 2008 financial crisis when she realigned strategies to diversify trade beyond the US and Europe. Since then, two-way annual trade has more than doubled to US$72 billion

Meanwhile, China has become by far Africa’s biggest trading partner, exchanging about US$184 billion-worth of goods a year, a growth of nearly 20 times trade since 2000 and almost three times the value of India’s trade in the region.

India in turn, is resting partly on her laurels of the Mahatma, having started his non-violence campaign on African soil and the numbers of 2nd and 3rd generation Indians well entrenched and assimilated within Africa – an advantage China doesn’t have. Besides soft power which India will wield during the summit, Africa’s growing population and vast natural resources are promising for a growing India. 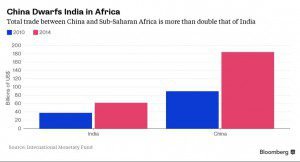 While India has approved about US$9 billion in concessional credit for projects in African countries in the past decade, analysts feel there isn’t much India can do to outweigh China in Africa. The Middle Kingdom whose economy is five times that of India’s is already Africa’s biggest trading partner. However, as C. Raja Mohan, a foreign policy commentator puts it, “We can’t match the Chinese in terms of resources – but any engagement we do with the Africans at least gives them a choice.”

The balance of trade between India and Sub Saharan Africa remains skewed towards India. A vast majority of exports from Africa to India are raw materials such as crude oil, gold, raw cotton, and precious stones. Meanwhile, most exports from India to sub-Saharan Africa consist of high-end consumer goods such as automobiles, pharmaceuticals, and telecom equipment. Nigeria is India’s largest trading partner with US$16.36 billion in trade, most of it from oil. After Nigeria, India’s biggest trading partners on the continent are South Africa, an exporter of gold and coal, and Angola, the region’s second-largest oil producer.