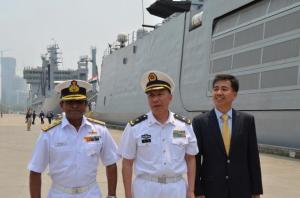 “Enhancing trust and understanding” between the militaries and navies of India and China, and increasing the frequency of interactions is what, according to the Hindu rear Admiral Gu Xiangping, the Deputy Commander of the Chinese East Sea Fleet, called the Indian navy’s passage exercises currently being held in Shanghai.

The passage exchange between the navy’s of China and India comes just a few months after a major stand-off in the South China Sea. India and China ran into turbulent waters last September when India’s state oil company ONGC was caught in a tropical storm together with the government of Vietnam which was jointly exploring the South China Sea for oil. Hotly contested for oil, natural gas and its rich marine life, China the dominant player in the region sought control of the area, also laid claim to by Vietnam, the Philippines, Taiwan, Malaysia and Brunei.

In addition, in the past India has also been weary of China’s string of Pearls strategy, which accuses China of befriending India’s neighboring nations and securing prominent port locations. The ill-equipped Indian navy is also weary of China’s massive naval build-up off its southern coast of Hainan, where satellite images have shown an underground submarine and warship. Similarly China accuses India of having satellite and listening stations off its Andaman and Nicobar coasts, which lie far off the East coast of India.

Nonetheless, this only spells that increased exchanges, better understandings and trust will augur well for the navy’s of both nations. “The aim of this year (marked as the year for India China Friendship)  is to increase exchanges between China and India so that there are no misunderstandings and we learn to cooperate and trust each other much more,” Vice Admiral Anil Chopra, Flag Officer Commanding in Chief of the Eastern Naval Command told the Hindu.