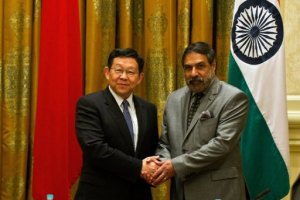 In a desperate attempt to attract foreign capital, keep the trade deficit from sinking to new lows and yet bolster trade with China, New Delhi has decided to give Chinese companies added incentives to invest in National Investment and Manufacturing Zones across India.

“That is where the opportunities beckon,” Anand Sharma, India’s commerce minister said in a speech to Indian and Chinese business leaders as reported by the AFP, adding the response from the Chinese to the investment proposal had been “positive and encouraging”.

The zones are being set up under India’s National Manufacturing Policy which aims to boost manufacturing as a percentage of gross domestic product to 25 percent from 16 percent in the next decade.

The policy is part of India’s struggle to provide jobs, accelerate manufacturing and revive an economy that’s dog-eared by corruption. Chen Deming, Sharma’s Chinese counterpart , in turn, said Beijing, which exports mainly capital goods such as heavy engineering equipment to India, recognized its trade relationship with India was lopsided. “We want to buy more goods from India to grow our trade relationship in a more balanced manner,” he said. Chinese investments in India are already to the tune of around US$580 million, mostly from infrastructure equipment.

“China and India are both fortunate to have sizeable domestic markets which give us the opportunity to offset the risks of the weak global economy,” he added. The two country’s expect bilateral trade to hit US$100 billion by 2015.

The policy push will be part of an agreed five-year plan on economic cooperation as well as a joint working group (JWG) concept to go into all trade related issues, Commerce Minister Anand Sharma said on Monday. The JWG, comprising senior officials from both sides, would be set up soon and will submit its recommendations within three months. It would continue to work on investment and trade-related matters thereafter.

The move while strengthening bilateral relations 50 years after the two nations fought a bitter war that changed the course of their foreign relations, also means that India is willing to concede a lot more to China in order to see long term domestic prosperity. The south Asian nation until now had been extremely suspicious of its neighbour, sometimes at the cost of cancelling orders for infrastructure projects when Chinese equipment companies were involved, even though the projects were crucial for development.

“Let us trust each other,” Sharma said, calling on his Chinese counterpart to take back a “positive message of India’s commitment to deepen and diversify its partnership with your great country.” “Both countries will grow at a faster pace through this partnership.”

The bold move to allow Chinese investments into India’s manufacturing zones also signify’s the desperate attempt by India to not only resuscitate the Indian economy, but also to improve the dire trade deficit that is a ballooning cause of concern.

The game plan is similar to the middle kingdom’s  strategy in Africa, South East Asia, Pakistan and the Middle East – China is being encouraged to invest in infrastructure as an enabler to growth. Investing in infrastructure will not only enable China access to another huge and growing market which it has long being trying to penetrate, it will also enable India to scale up its economy by adding a fresh burst of investments so badly needed.  India’s once-booming economy grew by just 5.3 percent between January and March, its slowest annual quarterly expansion in nearly a decade while China’s economy was expected “to grow 7.5 percent or hopefully eight percent this year,” down from growth of 9.2 percent last year. Further, China is one of the few nations that would invest in India, without considering too many parameters unlike the West as it sees a long term potential and not immediate returns.
The balance of trade is in favour of China. In 2011-12, it provisionally stood at US$39,651.46 million. Bilateral trade between India and China in 2011-12 stood at US$75,457.42 million as compared to US$59,000.36 million during 2010-11.