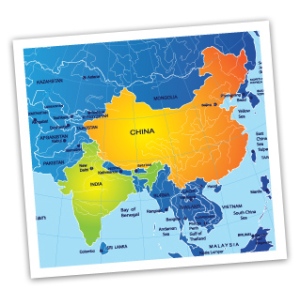 Two of China’s most notable India admirers have penned books highlighting what the Middle Kingdom and fastest growing economy can learn from its neighbor – India. At a time when the spectrum of financial pundits through art historians deify the rise of China, books from the Mainland, explaining the odyssey that is India and her merits comes as a welcome surprise.

One of the books, released in 2008, entitled ‘Let the Dragon and Elephant Tango, by Senior Fellow and former Director of the Institute of South & Central Asian Studies at the Shanghai Centre for International Studies, Mr Wang Dehua explains the enigma that is India, and urges the Chinese to learn from India’s social and religious tolerance. The second book released more recently by Ma Jiali, a senior strategist with the China Institute of Contemporary International Relations whose title translates as ‘the Rising Elephant’ describes modern India in Mandarin.

While both books urge the Chinese to know their neighbor to the South better, they also highlight areas where both China and India can symbiotically work together, for greater mutual benefit. The books point out to industries where China can learn from India, such as IT, pharmaceuticals and the education system. They also highlight India’s softer powers such as our services industry, ability to communicate flawlessly in English, social and religious tolerance, and communal harmony.

“India has so many advantages. China should learn about the IT and pharmaceutical industry and especially the education system in India,” Ma said, pointing out that the Indian postgraduates speak and write fluent English, unlike a majority of their counterparts in China. Asked his views on India’s growth as the second fastest growing major economy after China, he interrupted with a smile. “I wouldn’t call it the second fastest…I would call it another fast rising economy.”

Similarly, when Inchin Closer’s founder, Nazia Vasi caught up with Wang Dehua, post the release of his book in Shanghai in 2008, he said – The fact that India and China ties – political, cultural and economic are the strongest ever is a good thing. However, the two countries which are also the largest developing countries have many more issues they can cooperate on. The two countries suffered from the same history – that of colonial rule and both are developing now – we should aid each other so that both nations can prosper.
Further, I don’t understand why some people in India have a problem with China building railways in Tibet, if we reach the Indian border, this will only be good for trade of goods between India and China, and mutually benefit both countries.

In China, there is a growing awareness of India, the rise of her economy, the strength of her markets and idea that the two nations which already have such deep roots can create greater potential. While Premier Wen Jiabao’s visit to India last year, laid the political framework and gave the economic impetus to the two countries, the future with both countries taking the initiative to understand each other, break the ice that froze the cold war and establish stronger trade links will eventually see the dragon and elephant tango.