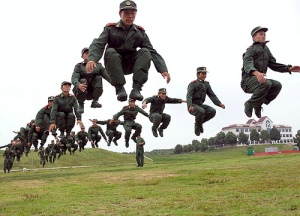 On the same day that India’s Supreme Court dismissed M M Sharma the First Secretary in the Indian Embassy in Beijing and also a RAW (Research and Analysis Wing) operative amid reports of liaisons with Chinese women, the Beijing released a national defence white paper stating it would seek to expand confidence-building measures with its neighbours, as well as stick to a defence policy that was defensive in nature.

Worried about the growing tension in China’s Western provinces, closer to the Islamic strongholds of Turkmenistan and Afghanistan, China is expressed its intention to beef up security on its borders. In a softer appeal to the Chinese citizenry, Beijing earlier announced plans to turn the restive capital of the far western region of Xinjiang into an “international trade centre” for central Asia by 2020. The move is seen by many outside China as a bid to convert and dominate the resident Uighurs which are more similar to East Turkmenistan than China.

China’s national defence white paper, outlined its discontent with major forces from outside the region threatening peace and security of Asia. “Relevant major powers are increasing their strategic investment,” said the paper. “The United States is reinforcing its regional military alliances, and increasing its involvement in regional security affairs.”

As regards India, the paper did not specifically mention defence exchanges with India, which are currently suspended, after China objected to the visit of the Northern Command’s army chief because the “sensitive” region of Kashmir was under his jurisdiction. However it did mention the PLA’s joint military exercises in the past – “During mutual port calls and other activities, the PLA Navy has run bilateral or multilateral joint maritime exercises with the navies of India, France, the U.K., Australia, Thailand, the U.S., Russia, Japan, New Zealand and Vietnam,” it said.

India and China which share a bitter-sweet history have both being increasing their regional military might over the last few years. Dubbed the string of pearls, India accuses China of installing and operating intelligence equipment in a string of islands and locations surrounding India. On its part China too accuses India of operating intelligence gathering equipment at strategic locations around China. Webbed between an intricate spy system, the two countries are ever suspicious of each other and are keen to align with regional forces and create friendly ties with neighbors so as to maintain regional harmony.