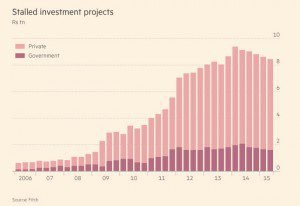 Its time New Delhi pulled a Beijing – a massive capital infusion to kick start the Indian economy and get India rolling.

Indian Private investments and capital expenditures have dropped significantly due to a slowing global economy and gradually waning economic enthusiasm. So much so that 2015 is recorded as the first year since 2006, that Indian public sector capital expenditure has overtaken the private sector, according to Standard Chartered. New Delhi needs to invest in her economy to get her engines chugging. Take for example Beijing’s infusion earlier this year which kept the Chinese economy in momentum.

The Chinese central government announced both the allocation of 1.13 trillion yuan (US$185.8 billion) for upgrading internet infrastructure and the creation of a 124.3 billion yuan fund for affordable housing. These expenditures followed authorization of six new rail lines costing 250 billion yuan. Compare this with Indian Prime Minister Modi’s request to the US to digitize India earlier this month and with China to build roads and railways.

Albeit the Indian economy is growing at 7 percent and is one of the stalwart BRICS economies, she is shaking at her knees, wobbly and uncertain of her next few steps, waiting and watching for the game to change – hopefully improve.

Her steel sector is low, Private power producers are in the doldrums, dragged down by problems at state-owned electricity boards. The property market is also struggling, while slowing global growth has begun to hit exporters. The Rs. 700 billion (US$11 billion) which Mr. Modi kept aside for infrastructure projects earlier this year has but created a small filip for overall investments.

While India’s Public sector is waiting for the government to step up spending, New Delhi has been caught twiddling her toes. In turn, asking the Private sector in India to invest. While the onus of being the first to invest large scale is thrown back and forth, foreign investments are upping their game in India. As one of the best performing and yet stable economies, US and Chinese firms are investing in India. Take for example, Taiwanese electronics group Foxconn, which is planning 12 new Indian factories.

Nonetheless, India needs to get moving. As the fastest growing economy poised to support the world economy next year, Prime Minister Modi and his cabinet will need to beef up investments, create additional jobs and ease policies and regulations.