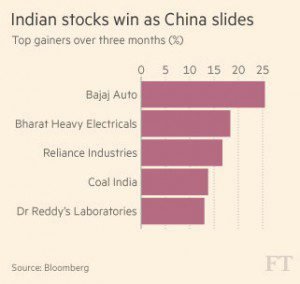 The Chinese bear market is expected to have little impact on Indian stocks. While China lost more than US$3 trillion on the stock markets, India’s benchmark Sensex eked out a 0.6 percent increase over the past three months making India the only market to rise in this period.

Although the Indian market has been bullish, while the Chinese indexes have crashed, the result is from a few foreign investors that have hedged their emerging markets money on India. Overall however, analysts expect that China’s crash will have little to do with Indian’s gain in the near term. The reason being that foreign investors hold less than one percent of Chinese stocks in China.

The stocks that are held in Chinese companies are either that listed in Hong Kong or in the USA or in other countries. These stocks had not moved as much as those listed in China. Thus the fall in share prices in China will not result in fund managers withdrawing money from other markets, ruling out any near term impact on India. In the long run however, if Chinese stocks continue to drop, global markets including India will be affected.

For the short term, though, the little furore India has seen is partly on the back of investors re-routing investments especially in chemical, steel, coal and pharmaceutical stocks into the Indian markets. According to the Straits Times, during the period since Chinese stocks started falling, US$705 million has been poured into India over the same period, sparking a world-beating 7 percent gain in the benchmark S&P BSE Sensex index. To quote the Financial Times, since the Chinese sell-off began on July 15th, the Shanghai Index has dropped nearly 30 percent.

Indian stocks meanwhile are up nearly 5 percent. Espousing the fact that the rise in Indian markets is attributed to the Chinese crash, Mahesh Nandurkar, India strategist at broker CLSA, credits newly buoyant local investors as much as foreign funds fleeing China for boosting India’s market over recent months. “More domestic flows are really supporting the market by pumping in a lot of funds,” he says. Nonetheless, with the Chinese government controlling much of market, analysts expect this to be short lived. The Chinese cannot afford to have their markets crash. They have already taken sever measures and will take further steps if necessary.