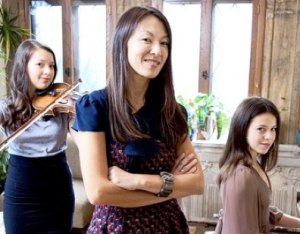 Chinese born, American mother and Harvard Law professor Amy Chua’s book ‘Battle Hymn Of The Tiger Mother’ has seen what the Chinese describe as a helicopter rise in sales. A publicity stunt, printed excerpts of her new book in the Wall Street Journal have caused the internet world to vent on all aspects from right parenting techniques, child punishment, Chinese children being straight-jacketed into excelling academically and therefore not having any innovative skills, to debates on the future of Chinese education Vs education in other countries, how important it is to play as a kid and first hand accounts from her daughters friends whether everything quoted in the book is true.

While the book explains how she roped and moulded her kids to be only A+ students, didn’t allow them sleep overs and birthday parties, few Chinese mothers in this day and age can identify with her. While education is given supreme importance in China, especially due to the one-child policy regardless of whether you are a girl or boy, harsh treatment and verbal abuses such as have been described in the book are hardly adhered to. Further, with the rate of suicides rising due to the stress of exams or just after having received exam results in India, many can say the same is meted out to Indian children.

Chinese and Indian students are expected to excel no matter which school you go to or what your parents have done before you. Though our education systems are different, both Chinese and Indian schools drill academic excellence into their children. This can be seen in our pride as we excel at quantitative GMAT scores and produce to the world’s top notch academicians. Advancing in the arts, dance or literature isn’t ever given as much credit as becoming an engineer, doctor or businessman. For that, ask any kid in a Chinese school what he aspires to become and the answer comes pat – a manager, ask an Indian kid the same question and its an engineer or doctor. While our education systems mould us differently, the pressures are the same. Take for example the provocative documentary, two million minutes which compares the high school education systems in America, China and India. While the documentary points out the high stress Indian and Chinese children endure to become top notch students,  looked from the other way round it could also show how we don’t give our kids the freedom to choose from a basket of subjects like they do in western universities. Cultivating a plethora of skills is unheard of in both India and China, you have to be best at something and thats why the Indians and Chinese compete so vehemently and excel in maths and science. That is also the reason we drill every possible skill into our children from an easy age. Spare time in India and China no longer means learning to ride a bicycle and skinning your knees, its rather the delicate art of juggling karate classes with calligraphy, or music and dance classes with computers. Suck indoors many Chinese and Indian kids are growing up sans developed interpersonal skills and ethical values which are not taught in school, but are extremely valuable life lessons.

While its currently an asset to have the maximum population of scientists, mathematicians, engineers and doctors amongst us in India and China, its is also important to have a balance of jobs in the economy. Culture, the arts and crafts are as important to promulgate for a developing nation. Given that Amy Chua’s book might be a one off account of a paranoid mother, it is also an interesting insight into our lives and times, into the how we breed our young, and how we need to sometimes mix our interests with the west so that we infuse our children with the best qualities and arm them with life skills.