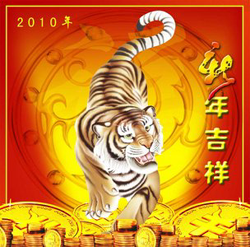 The year of the tiger, the third of the 12 Chinese zodiac signs however will not bring love and tranquility. In contrast, characterized by high levels of energy, vigor, optimism, impulsiveness and restlessness the year of the  bouncy big cat is expected to bring  large upheavals in economy and politics to the Asian tiger economies. While world conflicts and disasters tend to feature during Tiger years, on the positive side, new inventions and incredible technological advances are also characteristic of the tiger years.

Stock markets are expected to be volatile this year, share prices will tumble until early June, with the Hong Kong stock index reaching its 2010 low in mid-to late-May, which is said to be the most inauspicious period under the charge of the wild tiger.

On the trade and foreign policy front, China is expected to witness a further souring of relationship with the US as trade tensions explode and China’s undervalued yuan becomes the bone of contention even as unemployment worsens in the west. Intra-Asian trade could also be hit, as smaller, developing nations such as Indonesia and Malaysia protest China’s magnanimous presence in the region.

India will continue to see tensions on its borders, especially with Pakistan and China. Internal politics will also take a turn for the worse, as regional tensions explode and states create blueprints to self divide. However with several free trade agreements on the anvil, India’s booming economy will take large strides ahead.

China and India are also the only two nations that have upped military expenditure in the last year. While neither country has any inclination to go to war, the volatile year of the tiger might promote clashes, especially at the border.

Innovations and technological advances, positive signs of the year of the tiger are expected to further help the pharmaceutical and technology industries. Chinese and Indian factories will roll out new creations and there will be a huge market ready to buy innovative products that make lives more efficient.

On the Climate change front, it will be difficult for nations to form a consensus and decide on a particular policy. Widely varying opinions could stall a global deal.