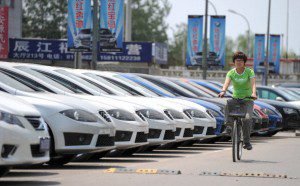 Long gone are the days when a Mumbai wanted to be a Shanghai, today Xiamen might be too much competition for the Indian commercial capital. Located on China’s South Eastern coast, in Fujian Province, Xiamen boasts to be China’s highest car ownership metro at present, with 30.5 cars for every 100 residents, leading many car manufacturers to increase distribution to smaller Chinese cities instead of large Indian metros.

Armed with a high disposable income, good roads and poor public transport, Chinese in inland provinces and smaller coastal towns are rising up to become the largest group to purchase privately owned cars. So much so that auto manufacturers such as Volkswagen, which sells more cars in China than any other carmaker, will expand its joint venture manufacturing capacity there by at least a third to 4 million units by 2018. That is more than the entire manufacturing capacity for four-wheeled vehicles in India.

Besides raising issues from the environment to oil consumption, the dilemma also poses a more serious question of inland China becoming more attractive to manufacturers and investors than metropolitan India. Reasons range from India’s sagging rupee rates to poor infrastructure, from high interest rates to rising  political ambiguity, yet when Indian cities compete with second the third tier Chinese cities our bilateral and multilateral trade face a serious problem.

Taken as a precursor of times to come, the auto industry could mark the way for many consumer durable companies as well. With large benefits meted out to China’s second and third tier cities, her citizens are seeing an economic boom. Flush with funds, incentives and perks to boost the inland economy, China’s smaller cities are tough competition for Indian cities which are still struggling with basic amenities. Those in the know, now say investors are re-thinking where they need to place their money and are considering India’s population quotient Vs China’s small city dividend.

With the Indian economy in a slump, regulations and bureaucracy eating into corporate patience, many companies are looking at cashing in on China – an economy they are now familiar with, have established a firm base, have the political support and whose economy is on an upswing. Beijing’s Go West policy initiated in the early 2000’s seems to have finally borne fruit.

Hailed as the highest sales in auto cars worldwide and thanks to Beijing successful Go West policy, China’s domestic sales growth has come from developing areas in the west and center, not the usual developed areas in eastern China. According to an auto industry report released by global market research firm Ipsos, car sales growth in west and central China in the first half was 33 percent more than last year’s, outpacing the industry average of 22 percent growth.

Being the fastest growing markets, west and central China boosted their market share from 24.7 to 27 percent nationally. More impressively, among the 2.73 million license plates issued in China in the first five months, inland provinces and regions, including Shaanxi, Gansu, Ningxia, Heilongjiang, Jiangxi and Sichuan, contributed 35 percent to the total growth of 24 percent so far.

“The government’s favorable policy for cars with engine capacity of or less than 1.6 liter also drove sales in western and central China, which are major markets for smaller cars,” said Sheng Guoliang, an auto analyst with Ipsos.

“Moreover, the major transportation vehicles in the rural regions, such as vans, minibuses, and motorcycles, are now being replaced by the smaller engine cars, especially Chinese-brand cars, as the income level in these regions have increased rapidly of late,” Sheng pointed out.