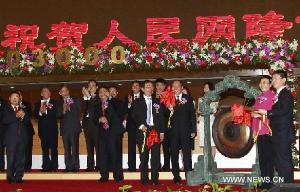 China’s first ever state owned media website to list on any Stock Exchange – People.cn Co. Ltd., had a much hyped listing on the Shanghai Stock Exchange. People.cn Co. Ltd. , the official website of the People’s Daily, the flagship newspaper of the Communist Party of China raised 1.4 billion yuan (US$222.2 million), nearly three times the amount initially planned on the Shanghai market.

At its Friday closing price of 34.72 yuan, 73.6 percent higher than the initial public offering price of 20 yuan, People.cn was worth 9.6 billion yuan ($1.5 billion), more than New York Times, which has a market capitalization of $951 million.

The company’s IPO prospectus showed that People.cn’s net profits rose to 139.48 million yuan last year from 81.65 million yuan in 2010. The major source of the company’s profits comes from advertisements, as well as information and wireless services.

The company said it plans to use 527 million yuan from the IPO proceeds to improve its wireless services, purchase technological upgrades and bolster its editorial team. Striving for better integration between a newspaper and the web portal – a constant juggle for media conglomerates worldwide – People.cn’s IPO comes as China’s state-owned portals are trying to go public in order to better compete with commercial websites such as Sina.com and Sohu.com. The company’s market value has reached 9.597 billion yuan after the IPO, compared with the 3.646 billion U.S.dollars of Sina.com, which listed in the U.S. market.

Beijing has actively encouraged its state-owned news media organizations to list in the domestic market in order to secure capital to improve services and extend Beijing’s control in the free-wheeling Internet sector.

Xinhuanet, the Internet portal of state news agency Xinhua, is also set to raise 1 billion yuan in Shanghai, but like People.cn, it will have to compete hard for advertising dollars with new media Internet darlings Sina Corp and Sohu.com Inc.

Analysts said the positioning of People.cn and Xinhuanet is different from that of Sina or Sohu because state-backed media focuses on political news, while Sina and Sohu are more entertainment focused.

Moreover, Sina and Sohu are not technically news organizations and their websites work more like news aggregators with some original content available. However, People.cn and Xinhuanet hire reporters and analysts to conduct interviews and generate content.

Trading of People.cn was halted twice on the first day – the first time – half an hour after the market opened, as their price climbed 10 percent higher than the opening price and again till 2:55 p.m., or the last five minutes of the trading, after its turnover rate exceeded 80 percent.

“Investors are scrambling for People.cn due to its scarcity. As long as you’re a Chinese person, you would know the company,” said Liu Guanwu, a media IPO analyst with Beijing-based consultancy Analysys International.