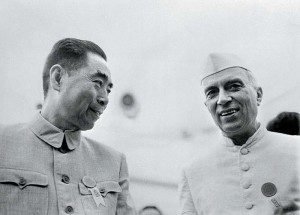 For the first time since 1954, leaders of India and China would have visited each others countries in the same year, the last time this happened was when Premier’s Zhou Enlai and Jawaharlal Nehru met. Then, was also the beginning of the formation of the cold war between the two neighbours, hopefully this time round these differences will melt into history.

As Indian Prime Minister Manmohan Singh sets in gear a host of deals ahead of his October 23rd meeting with Chinese Premier Li Keqiang, he will also make history by being the second Indian leader to visit China in a reciprocal visit across the himalayas. Premier Li Keqiang visited Delhi and Mumbai in May this year.

Plans for the leaders to announce big ticket deals are afoot with several high level delegations from Delhi already in Beijing. Over the past few days, dignitaries from the border security services, trade and finance, economy and policy have all been camped in Beijing ironing out last minute legalities before the leaders sign on the dotted line.

With bilateral trade and investment affecting the globe on a multilateral level, both China and India are consumed with re-balancing their basket of goods. In a strong bid to attract increased FDI into India, the premiers are expected to sign larger agreements between the two countries, boosting infrastructure and financing large deals within India.

While announcing significant tie-ups will boost the current Indian governments position in the upcoming elections, Delhi is seen to have already gone soft on Chinese firms, moving from a position of stern distrust to that of showing them the red carpet to set up facilities of excellence along the Delhi-Mumbai corridor. According to a report, officials said that the commerce and industry minister was keen to attract investment from China in the National Manufacturing Investment Zones. They said that at least 10 government departments, including the home ministry, were roped in before the Chinese companies were invited to invest in India. “The home ministry representative had no objection to the participation of Chinese companies. So, we do not see any opposition for security reasons,” an official privy to the discussions told the Times of India.

According to the Hindu, working group meetings under the framework of the annual Strategic Economic Dialogue (SED) met in Delhi from Wednesday until Friday to follow up on agreements reached between the two sides at last year’s dialogue, and prepare for the third round of the SED scheduled to be held in China later this year. The SED includes working groups on policy coordination, infrastructure, energy, environmental protection and high-technology.

On Friday, a delegation from the Commerce Ministry, led by Joint Secretary Asit Tripathi, held talks on trade statistical analysis with the Chinese Commerce Ministry, against the backdrop of a widening trade imbalance between both countries. Separately, Arvind Mayaram, Secretary Economic Affairs in the Ministry of Finance, met with Chinese Vice Minister of Finance Zhu Guangyao, during the 6th Financial Dialogue over on-going finance consultations, trade amongst the BRICS nations and

On Wednesday, Chinese Foreign Minister Wang Yi also met with Indian Foreign Minister Salman Khurshid at the UN headquarters, New York, on the sidelines of the 68th General Assembly, where the two discussed their positions on international disputes, reassured each other of their commitment to growing bilateral trade and promised to strengthen cooperation in all fields.

As a precursor to the Indian and Chinese premiers meetings in three weeks, the legwork seems to be afoot in taking sino-indian relations to the next level. Tighter collaborations, stronger strategies and binding bilateral relations will lead to a more prosperous, trustworthy and stable relation for both nations.