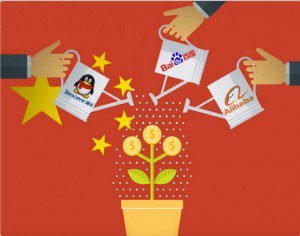 We live in an interesting investment climate, where India and China can’t either do with or without each other.

Cross border investments in online apps and platforms are breaking traditional barriers and creating healthy, profitable companies for both nations. For the Indian start-up market to flourish, Chinese investments are important and a vital cog in the wheel that will turn the Indian economy around.

For Chinese investors, India is a massive market, similar to theirs, with a huge growth potential. Smell a win-win situation? Yet there are hurdles, a lack of political will and diplomatic trust enter at various points in a healthy India-China relationship to often mar the smooth functioning and often put a spanner in the works. However, since there is a strong potential that the bond between India and China will withstand political head winds, Inchin Closer takes a look at the India strategy for the Big 3 Chinese investment heavy weights – Baidu, Alibaba and Tencent – or BAT as they are more commonly referred to. The article aims to demonstrate where these investment bell weathers are now and the direction they are looking at. It is expected to foretell, the direction Chinese investments into India will take and subsequently how the rest will follow.

ALIBABA: A scion for a variety of low priced goods, Alibaba has recently tied up with Indian payments gateways Paytm to initially allow select Indian Indian sellers to source products from China at cheaper rates as well as help them with logistics and payments. India is an inevitable market for Alibaba for whom a developing market in search of cheap goods is perfect, as compared to Europe. As a result, Alibaba India already has 4.5 million registered users, making it the world’s second largest market for Alibaba after China. Additionally, Alibaba invested US$680 million into Paytm last September making it the largest investor in the mobile payments leader. In October, Alibaba joined softbank to invest US$125 million out of a consolidated investment of US$500 million into Snapdeal an online shopping portal.

Alibaba is extremely keen on the growth potential of the Indian online shopping market. Michael Evans, Group President and Managing Director in March said that Alibaba had decided that the company would focus on their Indian operations in 2016. While Indian banking regulations are proving to be a big hurdle for the company owned by Jack Ma, they are finding ways to wade around it – Paytm solves their payments gateway and investments in Mypacco solves their Indian logistics hurdle.

Going forward, Alibaba is interested in growing their Indian presence in the B2B, B2C, online shopping, payments, mobile internet (UC browser) and cloud services. While UC browser is still extremely small in India, Alibaba has a plan to make it a complete content platform to browse, search, play games, download entertainment, and a lifestyle section. The idea is to localise content and become the defacto mobile platform for information.
BAIDU: Although a late entrant into India, Baidu has an office in New Delhi and is focusing on business development in the mobile software space. In mobile software, Baidu’s software tools such as DU Battery Saver, DU Speed ​​Booster, DU Cleaner are amongst the best worldwide and in India.
Baidu, which has been profitable in India since July 2015, issued a global mobile advertising platform DU Ad Platform in India, the platform relies on analysing search data on Baidu to create a precise ad push for Indian advertisers – leading to a rise in sales per click. The mobile platform is also keen to localise content in regional Indian languages. While they have already released apps in Bengali and Hindi, many more are on the horizon.
While Baidu yet has to make strategic investments in the Indian market, having come close to buying stakes in several online Indian start-ups, the Chinese internet giant yet has to bite the bullet. With a slightly different model to Alibaba – Baidu’s head office in China will take the final call for investments as against Alibaba’s Indian arm – the company is currently in wait and watch mode for India.
TENCENT: The Chinese king of social media read messaging platform Wechat, Tencent has had a hard time breaking into India which has been a Facebook and Whatsapp strong hold. With little success in the micro messaging space, Tencent has turned to online gaming in the international market. In India, the company invested US$90 million into Practo – India’s largest medical information portal in August 2015, . Tencent together with South Africa consortium Naspers further invested US$250 million in Ibibo one of India’s fastest growing online tourism platforms.
The online market space is finally breaking the odds the governments have built between us. Investments in co-spirited platforms and apps are breaking traditional barriers between us and enabling a more healthy flow of information and business between the neighbours.