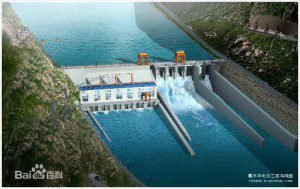 China today operationalized and put into commercial run the US$1.52 billion (9.6 billion yuan) Zam Hydropower Station, the largest in Tibet. Built on the upper reaches of the 2,900-km Brahmaputra river also known as the Yarlung Zangbo River, which flows through Tibet into India and later into Bangladesh is a major source of livelihood for Indians and Bangladeshis.

The damming of the river, has been a major bone of contention between India and China for a few years now. While the river originates in Tibet, and Beijing has assured India it will not dam the waters but build the dams to generate electricity, New Delhi has been weary the sweet and sour neighbour might usurp power to flood or create a drought situation in North Eastern India during times of unease. As a result, Indian officials monitor and measure the flow of water into India from China to ensure the country is ready for any eventuality, such as the possible holding back and sudden release of water by China.

“We have been providing hydrological data and emergency management to the Indian side, which has played an important role in flood prevention and disaster relief of downstream areas. The facts have shown that our assistance in these areas is effective, and the channels are smooth,” she had said.

The Zam Hydropower Station consists of 6 dams each with 85,000 kilowatts installed turbine units with a total installed capacity of 510,000 kilowatts. The Zangmu facility will supply 2.5 billion kilowatt-hours of power to the grid annually, or enough to meet the needs of more than 600,000 residents based on Chinese per capita power use in 2014. It is the world’s highest-altitude hydropower station and the largest of its kind. The project’s first unit began generating power in 2011. “It will alleviate the electricity shortage in central Tibet and empower the development of the electricity-strapped region. It is also an important energy base in central Tibet,” the company said.

The electricity the dam will provide is also a huge political trump card for Beijing who have been trying to calm and control China’s Western regions. The dam which took roughly eight years to construct is 140 kms from Lhasa, the capital of Tibet Province. It is also part of China’s clean energy plan to move away from coal based energy to hydro power over the next decade. The Brahmaputra in Tibet was identified in China’s 2011-2015 energy “five-year plan” as one of the key sites for hydropower development, along with two other transboundary rivers in southwest Yunnan province, the Salween and the Mekong.