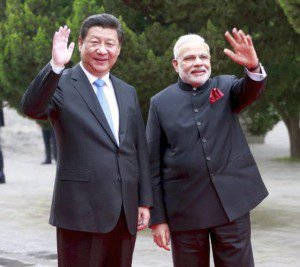 Indian Prime Minister Narendra Modi’s visit to Xian, Beijing and Shanghai has high on visuals yet, low on impact. The two countries had a lot of hopes riding on the shoulders of two of the most nationalist leaders we’ve had in decades, yet the steps taken to achieve any substantial impact either on economic, political or border issues was subpar.

During his three day visit, accompanied by the Chief ministers of some of India’s most prosperous states and heads of large Indian companies, Mr. Modi met Chinese president Xi Jinping in Xian his hometown, Prime Minister Li Keqiang in Beijing, Chinese and Indian students, businessmen, investors and society. He signed 21 MOU’s worth US$ 21 billion.

Funding from Chinese banks ICBC and China Development Bank for Airtel, Adani Power Company and Jindal Steel and Power accounted for the major part of the agreement total, as did tie-ups for renewable energy companies. The two countries share bilateral trade of US$70 billion, making China India’s biggest trading partner, but the figure is worryingly skewed, with an estimated US$40 billion in favour of China.

Mr. Modi’s visit seemed to dim further in comparison as it came just a few weeks after President Xi’s visit to Pakistan, towards which India shares unfavorable relations. President Xi Jinping paid an official visit to Pakistan from April 20th to 21st, signing deals worth over US$36 billion. During the visit, President Xi Jinping defined China-Pakistani relationship as “all-weather cooperative partnership”, which heralded an unprecedented era for the friendly cooperation between the two countries.

China is keen on building the “economic corridor” between the two countries, and wishes to connect Kashgar (a city in the south of Xinjiang) and Gwadar (an important port in Pakistan built by Chinese investments) directly via railway and pipeline, therefore eliminating the security problem of importing oil via the strait of Malacca. Nonetheless, the visit was pivotal in the fact that it did bring about positive reactions from both Chinese diplomats and the media.

Unlike earlier years, where China looked down on India as a poor, more unhygenic and less powerful country, this meeting of leaders strengthened the relationship the neighbours share to a more even keel. The Chinese media reported about the steady growth of India, highlighted our historic ties and signaled that India and China will together lead the world in the next few years. This change in attitude towards India is being looked at as a positive step which will herald closer bilateral relations between India and China.