Close
The tiger and dragon will tango tomorrow
November 17, 2011 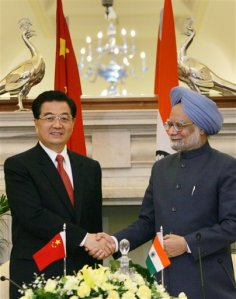 Wen Jiabao and Manmohan Singh will meet to strengthen bilateral ties between the Asian giants on the sidelines of the East Asia Summit held in in Bali, Indonesia tomorrow. The two heads of state will make this annual grouping of odd-fitting dialogue partners an even more complex body, while defying the geographic context of its title.

Both leaders have a lot to discuss amongst themselves from balancing the basket of goods more evenly to India’s deploying an additional 1,00,000 troops along the disputed border with China. From food grain and environmental issues to the financial crisis currently rocking the western hemisphere, Mr. Wen and Singh carry a heavy burden on their shoulders.

Last December when the two heads of state met, Wen Jiabao bearing presents for India, announced several landmark deals including extensive trade ties in the pharmaceutical and infrastructure industries to cultural and language exchanges, from huge financial loans to Indian companies to ironing out sticky visa and diplomatic hurdles.

This time though, the world economy has weathered some turbulent times and both leaders are looking inwards, keen to get their domestic houses in order. Having refrained from interfering in bailing any particular European nation out, both China and India also recently signed a paper stating their joint opinion that modern policies and practices need to be adopted to salvage the global economy.

Besides the incumbent financial crisis, as both nations are seeking to claw a larger power paw over Asia, their recent political pow-wow over the south China sea, and border disputes have more often than not singed relations. Additionally, India’s recently announced US$13 billion military modernisation plan, which reportedly includes deploying an additional 1,00,000 troops along the disputed border with China has gone down with Beijing as a bitter pill.

Nonetheless, with heads of the two largest economies meeting tomorrow, don’t expect fireworks as neither will make any dramatic statements, yet in their own silent and steady way both economies will plough through their differences and emerge the strong, resilient economies they represent.