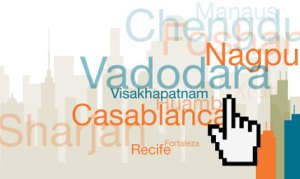 Over the next 15 years, 400 cities that most executives have never heard of such as Nagpur, Vadordra, Xi’an and Chengdu will generate nearly 40 percent of global growth. That’s more growth than the combined total of all developed economies plus the emerging markets’ megacities (those with populations of more than ten million, such as Mumbai, São Paulo, and Shanghai), which together have been the historic focus of most multinationals. As growth raises income levels, it will become important for companies to learn about varying consumer attitudes in the emerging markets’ “middleweight” cities (three-quarters of which have less than two million people), figuring out market entry strategies for them, and deciding how to allocate resources within and across them will all be crucial priorities.

Emerging market economies are expected to contribute over half of global growth by 2025, with a majority of Chinese and Indian cities marked as global hot spots for both in  terms of GDP growth and population. More than 20 of the world’s top 50 cities ranked by GDP will be located in Asia by the year 2025, up from 8 in 2007. By 2025, 136 new cities are expected to enter the top 600, all of them from the developing world and overwhelmingly—100 new cities—from China.. During that same time period, McKinsey research suggests, more than half of Europe’s top 50 cities will drop off the list, as will 3 in North America.This means that Chinese and Indian cities will see a rising population with higher income levels that will demand aspirational products and services. It also signify’s that wages and prices will rise considerably more than in other parts of the world, a very strategic change that could alter the way companies spend, build factories and focus their marketing towards.

Further from the McKinsey report

Until now, a company strategy focused on developed economies together with emerging market megacities (with populations of ten million or more) has made sense—this combination generates more than 70 percent of global GDP today. But these regions and very large cities in developing economies are likely to generate only an estimated one-third of global growth to 2025. A strategy focused on this combination will be insufficient for companies seeking growth.

It is a common misperception that megacities have been driving global growth for the past 15 years. In fact, most have not grown faster than their host economies, and MGI expects this trend to continue. Today’s 23 megacities—with populations of ten million or more—will contribute about 10 percent of global growth to 2025, below their 14 percent share of global GDP.

In contrast, 577 middleweights—cities with populations of between 150,000 and ten million, are seen contributing more than half of global growth to 2025, gaining share from today’s megacities. By 2025, 13 middleweights are likely to be have become megacities, 12 of which are in emerging markets (the exception is Chicago) and seven in China alone.

Emerging market mega- and middleweight cities together—423 of them are included in the City 600—are likely to contribute more than 45 percent of global growth from 2007 to 2025. Across the world, MGI identifies 407 emerging middleweight cities contributing nearly 40 percent of global growth, more than the entire developed world and emerging markets megacities combined.

By 2025, developing region cities of the City 600 will be home to an estimated 235 million middle-class households earning more than $20,000 a year at purchasing power parity (PPP). This compares with more than 210 million such households expected in the cities of developed regions. So even at the higher end of the middle-class segment, there will be more households in emerging market cities than in developed ones.

MGI finds that population in the City 600 will grow an estimated 1.6 times faster than the population of the world as a whole. By 2025, the City 600 will be home to an estimated 310 million more people of working age—and account for almost 35 percent of the expansion of the potential global workforce. Almost all of this increase is likely to be in the cities of emerging markets—and two-thirds in the leading cities of China and India.

By 2025, there are likely to be about 13 million more children aged up to 15 in these 600 cities than there were in 2007 but with very different trends across regions. An estimated seven million additional children will be in the City 600’s Chinese cities compared with 2007, despite the fact that the number of children in China overall is declining, and MGI sees cities in the United States and Canada will being home to three million more children in 2025 than in 2007. By combining demographic and income distribution data, MGI estimates that the number of children in households with an annual household income above $20,000 is likely to grow more than ten times as fast in the cities of developing regions as those in developed economies. The research also shows that aging in cities is not just a developed country phenomenon. The top 216 cities in China will have 80 million new older citizens and Shanghai is expected to be home to twice as many older people as New York.