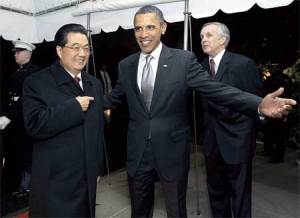 As the titans meet in Washington to chart the course for the global economy, marking one of 2011’s defining diplomatic events, on day 1, America and China announced the conclusion of US$45 billion US export deals, including a massive US$19 billion contract for 200 Boeing aircraft, supporting 235,000 US jobs. Meanwhile US and Chinese energy companies led by GE also signed several agreements including a US$7.5 billion deal between Alcoa and China Power Investment Corp for a broad range of aluminum and energy projects, both inside and outside China, while General Electric (GE) Energy signed a joint venture with Shenhua Group Corp for clean coal technologies.  On a softer note, the two superpowers pledged to further engage in people to people ties and as a goodwill measure, China extended the term of two giant pandas Mei Xiang and Tian Tian at the National Zoo for another five years.

Swept under the rug were the uncertainties and pressure politics of the China’s stealth aircraft, the patrolled waters of the east China sea,  US arms sales to Taiwan, Obama’s meeting with the Dalai lama, the appreciation of the yuan, trade deficits and the American sentiment against China’s refusal to release Liu Xiaobo, a jailed Nobel peace-prize winner. As the world watches, it seems, Presidents Obama and Hu Jintao would rather choreographically celebrate their symbiotic friendship and strengthened future than mar the visit by protests and gaffes as in the past.

While both sides have been informed that they will have to get down and dirty by their own pressure groups, both China and America are side stepping many issues that could boil over very soon. The American’s see China as a threat, one that is taking their jobs, plundering human resources and asserting their military superiority in Asia. The Chinese view America with suspicion as being imprudent, careless and meddling too much in what is not theirs.  Nonetheless, while this meeting, like the Manmohan-Wen meeting last month is extremely significant, the impact though wide, will determine what the global economy will look like in 2020.