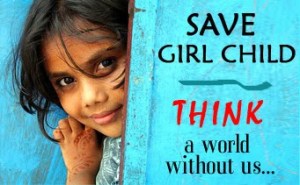 Appalling numbers by the World Bank from the world’s most populous nations indicate that China and India have the world’s worst sex ratios. The growing superpowers along with Sub-Saharan Africa have the most skewed sex ratio in the world. China (population of 1.3 billion), India (1.15 billion), and Sub-Saharan Africa (0.8 billion) together account for 87 per cent of the world’s “missing” girls and excess female mortality, says the new World Development Report – 2012: Gender and Equality and Development.

This is despite more girls being literate and healthier than ever before, and a greater number of them participating in the workforce, says the report, brought out by the World Bank.

Ringing the alarm bells on the nearly 4 million “missing” women or excess female mortality in the developing world, the report finds, 23 percent of these are never born, 10 percent are missing in early childhood (under 5 years), 21 percent in the reproductive years (15–49 years), and 38 percent in the age 60 and older group are missing.

Throwing light on infant mortality, the report added that in 2008 alone, an estimated one million girls in China and 250,000 girls in India were missing at birth. Indicating that although education, technology and economic development are spreading across China and India, infant mortality continues to remain on the rise, in fact its spreading inland from China’s more prosperous Eastern Coast and South from India’s more sex discriminatory North.

As a result of the “deadly combination’ of declining fertility rates and, new ultrasound technologies and a strong preference for sons, especially in China’s after its one-child policy and among educated Hindu women in north India, unborn girls still face a big disadvantage.