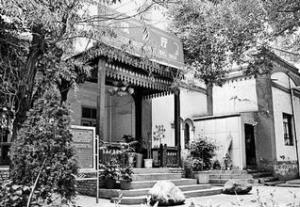 Xinjiang Uyghur Autonomous Region, one of China’s five Autonomous Regions is keen to reignite ties with India, a neighboring country it shares a border with. In order to boost investments in China’s far western region, honing in on historic and cultural liaisons, Nur Bekri, the governor of Xinjiang began a four-day visit to New Delhi and Mumbai on Thursday. China’s other Autonomous Regions include – Inner Mongolia, Tibet, Ningxia and Guangxi.

Highlighting the importance of Indian trade and cultural ties with Kashgar during trade along the silk route, India had stationed a consulate in the Xinjing capital, which has since the cold war fallen awry. The building is now a Chinese restaurant (see pic). Pakistan which also shares a border with Xinjiang, has since moved merchants in as a channel for growing Pakistan-China trade.  The people of Xinjiang speak a dialect of Persian, which is similar to Urdu, they also adore Bollywood films, hang posters of Hindi film superstars in their houses, dance to Bollywood music and eat food similar to northern India.

Recognizing the importance of India as an economically strong neighbor, the Kashgar government is keen to engage with New Delhi especially since Beijing recently announced policies to develop the Kashgar SEZ. At present bilateral trade between India and Xinjiang is worth only $35 million, even as China has become the largest trading partner of India. The policies would support the “construction of the Kashgar economic development zone which borders with India”, said the regional government’s Development and Reform Committee. “We welcome Indian companies to invest in Kashgar, which possesses great growth potential in bilateral trade.” The DRC said it would also favour the opening of international flights from Kashgar to India, and would “encourage” foreign airlines to open direct flights.

According to the Hindu, officials from Xinjiang’s Political and Legal Committee, who will accompany Mr. Bekri, said they would like to work more with India on counterterrorism. The government said it was also keen to increase the flow of people from India, in marked contrast with China’s earlier reservations to opening up Xinjiang citing stability concerns. It did not, however, reply to questions on whether it would favour the opening up of an Indian trade office or Consulate in Urumqi or Kashgar in the future.